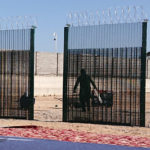 A key customer requirement has driven one of the UK’s steel mesh perimeter fencing manufacturers to a probable world-beating performance in security tests.

A development fencing system largely based on Zaun’s popular CorruSec product has resisted serious attempts at forced entry for over 20 minutes with tools including reciprocating saws and angle grinders in a series of independent tests conducted recently by trained Building Research Establishment (BRE) assessors.

Independent testers from the BRE mounted a sustained attack on the development fence, loosely based on an SR5 ‘serious attempt at forced entry’. They used top-end battery-powered cutting tools including a 750 W reciprocating saw with specialist blades employed by Fire and Rescue teams and 18 V circular saws, jigsaws and disk grinders, axes (including an 850 mm felling axe), a hooligan bar, a 1.5 kg lump hammer and, last but not least, 500 mm-long bolt cutters.

The testers were trying to create a ‘man-sized’ 600 mm square hole in the fence line. This is larger than the 450 mm x 225 mm hole that’s part of the SR5 testing regime.

Henman added: “Even with that astonishing arsenal, the testers took more than 20 minutes to create this larger breach. The fence, which uses a clever combination of materials and geometry to maximise resistance, needed to survive for only ten minutes in order to pass the client’s test.”