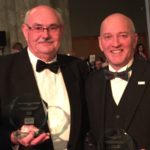 Two outstanding individuals have been recognised by the Fire & Security Association (FSA) at this year’s IFSEC Security and Fire Excellence Awards for changing the sector for the better. The FSA was an official partner at the event, which took place on Wednesday 21 November at The Hilton Hotel on London’s Park Lane.

Pat Allen of the Abel Alarm Company won the Peter Greenwood Security Award for his outstanding contribution to the security systems industry. Allen has been instrumental in bringing the industry together in developing, testing and implementing a new apprenticeship standard for fire, emergency and security apprentices.

The Peter Greenwood Security Award is the longest established individual award in the security profession and has been in existence since Peter Greenwood’s untimely death in January 1995. Greenwood was a former head of the ECA Security Group and involved with its Fire Group. He was also a founder member of the Security Industry Lead Body (SILB).

Kevin Griffin of Logic Systems Fire and Security won the Ian Marsh Fire Award for his enthusiasm and selfless concern for the fire and emergency systems industry. Griffin has built up an incredibly strong reputation in Scotland for helping to improve standards within the fire industry.

The Ian Marsh Fire Award was renamed in honour of Ian Marsh in 2013, the year after he died from illness. Marsh made a major contribution to the industry, including an active involvement with both British Standards and the Wiring Regulations, as well as having a pivotal role in the creation of certification body ELECSA.

Judges for the awards included Tom Brookes (chair of the FSA and managing director of Lindum Fire Services), Richard Jenkins (CEO of the National Security Inspectorate), Alex Carmichael (CEO at the Security Systems and Alarms Inspection Board) and Una Riley.

Speaking about this year’s award winners, Tom Brookes commented: “The FSA is delighted that Pat Allen and Kevin Griffin have won, respectively, the Peter Greenwood Security Award and the Ian Marsh Fire Award. Both Kevin and Pat have been fantastic servants to their industries over the years through their continued efforts to improve standards and bring more young people into the fold.”

The FSA consists of members of the ECA, the electrotechnical and engineering services Trade Association, and Scottish electrical trade body SELECT.

*Further information on the two awards can be accessed at http://www.eca.co.uk/business-industry-support/awards/peter-greenwood-security-award