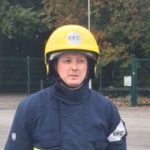 An off-duty Securitas UK officer recently took control in the aftermath of a road traffic accident, earning the praise of both his employer and the family of the injured victim.

Terry Clark, a security team leader working at Virgin Money’s Gosforth head office, was leaving the Fire Service College in Moreton-in-Marsh, Gloucestershire, on the afternoon of Sunday 9 October having completed an Emergency Fire Crew Capability (EFCC) course. Clark is one of over 600 of Securitas UK officers to have undergone the training, which includes fundamental fire and rescue skills as well as instruction in First Aid.

Clark drove past a Toyota Yaris which had evidently been involved in an accident. Instantly deciding to turn around and offer assistance, he discovered that the driver of the Toyota – the only vehicle involved – had swerved to avoid a motorcycle travelling in the same direction which had cut in to avoid an oncoming vehicle.

The Toyota rolled several times and, luckily, the vehicle ended up on its wheels, although the roof had caved in, the passenger side A-pillar had folded and the windscreen was shattered. The driver of the following car had stopped to assist and called the Emergency Services, but nobody appeared to have taken control of the situation and vehicles continued to speed by the scene of the accident in both directions.

First Aid training to the fore

The driver of the Toyota, 23-year-old student Holly Bradshaw, had been driving from Chipping Norton to the nearby village of Little Compton with shopping for her grandfather. She was sitting on the load space with the car’s boot open. Bringing to bear his newly-acquired First Aid training, Clark assisted Holly to assume a lying down position away from the road and supported her neck to avoid further damage while waiting for the paramedic, doctors and the police service to arrive on scene.

Taking control of the situation, Clark instructed the three other people who had stopped to move his vehicle on to the grass verge and direct traffic safely around the scene. All the while, Clark was comforting Holly, who was drifting in and out of consciousness, and reassuring her that help was on its way, as were her parents Brad and Sue.

When the Emergency Services arrived some 35 minutes later, Clark continued to stabilise Holly’s neck while she was being assessed and put into the ambulance to be taken to the John Radcliffe Hospital in Oxford.

Fortunately, Holly was discharged the same evening with bruising and soft tissue injuries, having undergone a series of x-rays and CAT scans.

Speaking about the episode, Clark commented: “It’s a huge coincidence that I had literally just completed the EFCC course and, in particular, the First Aid training half an hour beforehand. Looking at Holly’s car, it was a miracle that she didn’t sustain more serious injuries, or worse. We’re trained to take control in certain situations, and I also think the fact that I was wearing uniform and the Fire Service College lanyard reassured others that I knew what to do.”

Holly’s father Brad said: “Holly was very lucky to get away in one piece, and if there had been a passenger, they certainly wouldn’t have come off so lightly. When we arrived at the scene we didn’t know what to expect, and it was very reassuring to see that Terry was supporting Holly so well. He emailed me that evening to check on Holly’s progress and we’re still in touch. We’re all very grateful for his assistance, level-headedness and genuine concern.”

Shaun Kennedy, director of Specialised Protective Services at Securitas UK, commented: “Each year, we see an ever-increasing number of instances where one of our trained fire contingency crew assist in an accident or incident in which an individual or individuals have sustained serious injury. During the last few incidents, we have been the first at the scene and, in each instance, the knowledge and training has kicked in and we have either saved a life or prevented further injury. I’m really proud of all of our EFCC-trained staff. I’m sure many of the their positive and courageous actions are not captured as they all believe they are simply doing their job and using the skills and knowledge we have given them. “