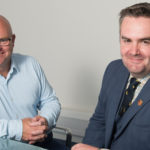 The world’s first Video Surveillance-as-a-Service (VSaaS) system, Ocucon was the only UK company to be shortlisted in the highly competitive awards organised by the Retail Industry Leaders Association (RILA). The awards recognise game-changing technologies from around the globe that are helping to transform retail loss prevention efforts.

Stephen Purvis, Ocucon’s CTO, competed alongside other award finalists from around the world to pitch the company’s ground-breaking technology to the Judges and attendees at this year’s RILA Retail Asset Protection Conference. The conference, which took place from 5-8 May in Denver, brought together top executives from the world’s leading retailers.

Commenting on the awards finalists, Lisa LaBruno (executive vice-president for retail operations and innovation at the RILA) said: “These awards are such a special opportunity for RILA and the entire retail asset protection community to witness first-hand the future of our industry. In front of hundreds of retail asset protection practitioners, the companies involved dramatically showcased why their technology is considered ‘game-changing’. We’re honoured to be able to recognise them and their achievements.”

Purvis responded: “We’re honoured to have been awarded first place in the RILA 2019 (R)Tech Asset Protection Innovation Awards. It’s a tremendous accolade and one that’s testament to the hard work of our highly-talented team and industry partners. We’re so grateful to all of the retail leaders who, over the last 18 months, have given their time to help us shape the product, encourage us and share their vision of the future of tech in retail.”

During the awards presentation, the Judges were impressed with demonstrations of Ocucon’s powerful, cloud-based storage and retrieval platform, as well as its intelligent video analytics platform.

Ocucon’s awards presentation also had the backing of two key figures in the US retail industry, featuring powerful endorsements from both Brand Elverston, former director of asset protection at Walmart Inc., and Jeff Powers (former vice-president at Sensormatic and Verint).

Breaking new ground in surveillance technology, Ocucon is the first technology of its kind to offer unlimited cloud-based storage as a service. Combining intelligent data analytics with the facility to store, analyse and retrieve unlimited amounts of HD video surveillance footage from within the Ocucon portal, it revolutionises the way in which retailers defend against crime, combat fraudulent insurance clams and use post-recording video analytics for enhanced loss prevention and business insights.

Ocucon recently announced that it will provide free upgrades of all CCTV hardware to customers of its standard cloud-based storage package as the company launched a first-of-its-kind zero capital expenditure model in the surveillance industry.