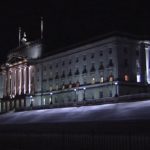 Northern Ireland’s security, economy and delicate peace process will be negatively affected should the UK vote to leave the European Union (EU). This is the argument put forward in a new article published by the Journal of the Royal United Services Institute. As the EU Referendum debate intensifies, the feature claims that politicians in Westminster and Stormont have failed to address the risks to Northern Ireland associated with Brexit.

Burke, who’s a lecturer in strategic studies at the University of Portsmouth, eloquently outlines how membership of the EU has also allowed deeper security co-operation between the UK and Ireland through the European Union Arrest Warrant (EAW). With 192 suspected criminals or terrorists handed over to the UK authorities by Ireland under the EAW between 2004 and 2013, Burke observes that European police and judicial co-operation agencies such as Europol and Eurojust are also frequently employed by the British and Irish police and Security Services during counter-terrorism and criminal investigations on both sides of the border.

While the article duly acknowledges that the British-Irish Council – created under the Good Friday Agreement – could serve as an overarching body to replace EU agreements on a bilateral basis, it also argues that the very same body has been largely ignored by David Cameron since he became Prime Minister.

Burke claims that Irish officials are concerned at the prospect of the UK’s imminent departure from the EAW. “A similar agreement, Irish officials warn, would have to be negotiated. A protracted consultative and legislative process would likely ensue.”

The article goes on to claim that “joint EU membership also helps to underpin the Good Friday Agreement. The Irish Government – having ceded Articles 2 and 3 of the Irish Constitution (claiming jurisdiction over the whole island) – leaned on a collective European identity as a means of reassuring nationalists in Northern Ireland that the island, despite this constitutional change, would come closer together.”

Burke states: “The UK’s part in a wider European identity, articulated through its membership of the EU, is also attractive to those who, although they’ve come to accept UK sovereignty over Northern Ireland, are uncomfortable with being identified as British. Removing a European dimension that ‘softens the border’ between the North and South of Ireland may upset the delicate equilibrium painstakingly constructed since the Good Friday Agreement.”

Meanwhile, Burke also argues that: “Any re-imposition of border controls on the UK’s only land border to restrict ‘back door’ immigration from the EU or the introduction of enhanced customs inspections, hindering cross-border trade, would likely see a further deterioration in Northern Ireland’s already parlous economic fortunes.”

Burke asserts that much of Northern Ireland’s ‘peace dividend’ has come from the EU, both through structural funds aimed at boosting its economy and specialised programmes designed to reinforce the peace process itself. Compared with other UK regions, Northern Ireland also disproportionately benefits from Common Agriculture Policy funding.

Burke argues it’s unlikely that fiscal transfers from London will match lost EU funds post-Brexit. He also outlines how Northern Ireland’s robust civil society – often called upon to mitigate tensions during regular periods of political deadlock – is heavily dependent on crucial EU funding which will be hard to replace in the event of Brexit.

“The potential withdrawal of such funds risks undermining the cross-community dialogue as well as community and mental health projects that have been put in place since the Good Friday Agreement.”

The article examines in some detail how the debate in Northern Ireland on the merits of Brexit has become increasingly polarised along familiar lines, with the Democratic Unionist Party opting for ‘Vote Leave’ and Sinn Fein for remaining in the EU. “It’s the legacy of ‘The Troubles’, the persistent breakdown of trust and institutional co-operation in the Stormont Executive and Assembly that most seriously hinders a serious cross-party policy discussion of the UK’s membership of the EU in Northern Ireland.”

Based on the findings of in-depth research and interviews conducted with officials in both Northern Ireland and the Republic of Ireland, Burke also reveals how Irish diplomats are privately in ‘campaign mode’.

“A special unit has been set up within the Department of Foreign Affairs and Trade to deal with Brexit issues and advise on the EU Referendum. Dublin is mindful that 330,000 Irish citizens are eligible to vote in UK Referendums, with a similar number of UK citizens living in the Republic of Ireland who are also entitled to cast a vote.”

*Read the article in full at: https://RUSI.org/NI-Brexit-JNL