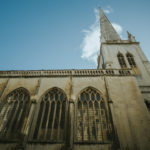 Grade II-listed, St Nicholas Church was built in 1769, although the crypt dates back to medieval times. St Nicholas has always played an important role in Bristol, whether it be for worship, providing shelter during WWII or, more recently, home to Bristol City Council’s tourist office and archive. The church was reopened in 2018 as a centre for worship, mission and social engagement, continuing the legacy of being a church “in the city, for the city”.

To protect this much-loved building, a Nittan Evolution analogue addressable fire detection system has been installed throughout. This features 51 devices including detectors and beam detectors, Call Points and high output sounder beacons.

Coomber Fire and Security Systems is the largest independent fire and security installer in Somerset.  It has extensive experience in fire detection systems for churches and chose Nittan for this project based on the reliability and quality of its Evolution range combined with the increased loop voltage which allows for longer cable runs.

Its advanced, highly flexible protocol allows for substantial amounts of information to be transmitted at high speed and is not affected by the number of devices on the loop.