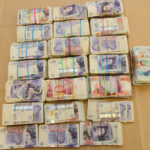 Nine suspects have been arrested as part of a National Crime Agency (NCA) investigation into an organised crime group smuggling money out of the UK to Dubai hidden in suitcases. Eight individuals have been arrested at addresses in Cleckheaton, Bradford and Dewsbury, all in West Yorkshire, while one was arrested in Bridlington, Humberside.

NCA investigators believe the nine men are part of an organised crime group that smuggled millions of pounds out of UK airports last year. Nine linked suspects were previously arrested by Border Force officers trying to smuggle money out of the UK, while a further six suspects have been arrested and questioned about their suspected roles as money laundering facilitators and co-ordinators.

In total, with today’s activity there have been 24 arrests linked to this investigation. As part of the wider investigation into the organised crime group, £2.3 million has been seized.

It is the second time in a week that the NCA has publicised arrests and charges connected with money being smuggled to Dubai through UK airports. Previously, the agency announced the charging of ten suspects – in an unrelated operation – believed to be part of an organised crime group that has laundered £15.5 million from the UK over three years.

NCA operations manager Jon Hughes explained: “Border Force has done excellent work preventing the money leaving the UK and we have a series of lines of enquiry to pursue and are working effectively with our partners in the Dubai Police. Organised crime groups rely on money launderers and cash is their lifeblood. We believe that we’ve significantly disrupted an extensive crime group responsible for trying to wash drugs money.”

The National Economic Crime Centre, which was set up to bolster the UK’s fight against economic crime, is assisting the investigation and using its role in co-ordinating the response to cash smuggling with international partners.