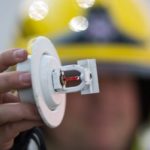 The National Fire Chiefs Council (NFCC) has again urged the Government to fit sprinklers in all new schools and those undergoing refurbishment. This call forms part of the NFCC’s response to a call for evidence on the ‘Technical Review of Building Bulletin 100: Design for Fire Safety in Schools’ put together with input from building fire safety specialists from across the UK’s Fire and Rescue Services.

The submission highlighted the unacceptable outcome following the 2007 edition of the guidance that the rate of schools being fitted with sprinklers may have fallen from 70% to as low as 15% of new builds, a recent study conducted by the BBC suggests.

Terry McDermott, the NFCC’s lead for sprinklers, called on the Government to acknowledge the failure of the design guide to achieve the expectation that most, if not all, new schools would be fitted with sprinklers.

Loopholes have allowed designers to conveniently interpret the guidance. The NFCC considers that all new schools, as well as those undergoing refurbishment, should have sprinklers fitted.  Currently, England is lagging behind Scotland and Wales in terms of sprinkler inclusion in building design and this situation must be rectified.

Roy Wilsher, chair of the NFCC, stated: “We have a responsibility in this country to ensure we do everything that we possibly can to make buildings safer for occupants. The increased use of sprinklers in schools is a no-brainer. UK school fires disrupt the education of an estimated 90,000 children and students annually. Not only is ensuring our children’s safety paramount, but schools are important community assets that need to be protected from damage.”

Wilsher went on to state: “The figures associated with fire damage in schools are significant. The Association of British Insurers has reported that the most expensive school fires typically cost around £2.8 million to address. Covering a four-year period, an average of 24 large loss fires occurred every year totalling £67.2 million. The NFCC looks forward to Government re-examining the Building Bulletin 100 guide and making the necessary changes to protect schools.”

In conclusion, Wilsher explained to Risk Xtra: “We’re pleased the Secretary of State for Education is committed – as part of wider work on fire safety across Government – to work with the Secretary of State for Housing, Communities and Local Government on joining up the reviews of fire safety guidance. We will continue to hold the Government to account to ensure that we see not only sprinklers fitted in all new and refurbished schools, but also to raise fire engineering standards in UK building design right cross the board.”

*The NFCC’s full response to the call for evidence can be viewed online at: https://www.nationalfirechiefs.org.uk/Consultations

The Insurance ‘Win-Win’: Assessing The Benefits of Water Leak Detection