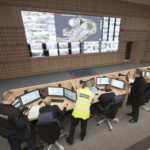 Eurotunnel Group has inaugurated its new Security Control Centre at the French Terminal in Coquelles in the presence of Madame Fabienne Buccio (Préfète of the Pas de Calais) and Paul Booth, deputy director of Border Force for the South East and Europe Region.

The decision to embark on this major investment was taken following a meeting on the site during the summer of 2015 between Theresa May and Bernard Cazeneuve (who were, at the time, Home Secretaries for the UK and France respectively).

The new building, which has a floor space of 547 m², is equipped with the latest technology and can accommodate all of the different law enforcement authorities present on the Coquelles site to strengthen co-operation on the ground between Eurotunnel’s own personnel and the two states.

The 20 m² screen video wall in the new Control Room, which itself measures 171 m², is monitored by five video operators, the supervisor and co-ordinator who are permanently stationed in the space. “Exceptional views” are offered over the 650 hectares of the Coquelles site and its 30 km of high security perimeter fencing thanks to images relayed by 570 static and mobile cameras equipped with both day and night vision capabilities.

The building features two living walls and a light well which helps to reduce the use of electricity for lighting. In addition, the heat generated from the IT equipment in the space is recovered and re-used for heating via an air re-circulation system.

On 23 June last year, of course, the UK voted to leave the European Union, giving rise to a period of uncertainty. As holder of the concession to operate the Channel Tunnel Fixed Link until 2086, Eurotunnel considers that this process, which will lead to two years of negotiations, will not impact the vitality of trade and tourism between the UK and continental Europe.

The EY report entitled ‘Economic Footprint of the Channel Tunnel Fixed Link’ underlines the importance of traffic flows via the Channel Tunnel. 2016 proved that the cross-Channel market continued to increase. Eurotunnel in particular experienced a record year, transporting more than 1,640,000 trucks.

Jacques Gounon, chairman and CEO of the Eurotunnel Group, stated: “Since 23 June 2016, Eurotunnel has mistakenly been used as a reference for the uncertainty caused by Brexit. However, the facts show that the vital activity of the Channel Tunnel is both robust and thriving.”

2017 SIA Stakeholder Conference to run under banner of ‘Partnership Working’