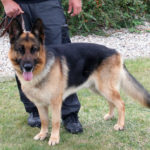 According to the National Association of Security Dog Users (NASDU), approximately 5,000 security dogs are employed in the UK’s security sector. The new standards provide recommendations on how dog handlers should professionally handle canines on a day-to-day basis, and afford detailed advice on how to comply with existing Government legislation (such as the Guard Dogs Act 1975, the Dangerous Dogs Act 1991 and the latest Animal Control Bill 2015).

The National Police Chiefs’ Council classifies security dogs as second only to firearms in ‘use of force’, demonstrating a critical safety need for a standard that provides comprehensive advice for professional dog handlers.

In order to develop the Codes of Practice, BSI convened a diverse group of individuals and organisations who use security dogs, such as construction site managers, police officers and staff at the Ministry of Defence.

The standards are designed to provide comprehensive guidance for the many and varied uses of security dogs, including in high-security environments where canines trained in bomb detection must be expertly handled.

Building and construction site employees who require a security dog on a mobile basis can also use the standard. Security dogs are sought by construction sector managers not only to protect a building site, but also to ensure the safety of the handler or other members of staff at a given location as they act as a visual deterrent.

Anne Hayes, head of market development for Government and resilience at BSI, said: “BS 8517-1 and BS 8517-2 are designed to simplify the patchwork of laws by which security dog handlers must abide. It’s essential that both the handler and the security patrol dog have been fully-trained and work in partnership so that the dogs are safe when among members of the public, and that they can also defend their handlers should the need arise.”

Recommendations in the Codes

BS 8517-1: Code of Practice for the Use of General Security Dogs covers all aspects concerning the general welfare of such dogs, including kennelling and veterinary guidance. Recommendations in the standard take into account recent changes in dog breeds and the requirement for compulsory micro-chipping in security dogs.

The need for dog handlers to obtain specific insurance and equipment – including the use of correction collars – is also covered in the new standard.

BS 8517-2: Code of Practice for the Use of Detection Dogs has been developed for more advanced users of security dogs, such as those who require dogs for the detection of drugs, firearms, munitions and explosives.

Part 2 includes issues relating to the welfare of animals covered by Part 1 of the standard, and also recommendations for procuring security dog services to ensure that the service meets the unique requirements of dog handlers.

In addition to NASDU and the National Police Chiefs’ Council, other organisations involved in the development of the Codes of Practice included the Security Industry Authority and the Royal Army Veterinary Corps as well as representatives from the Battersea Dogs and Cats Home.