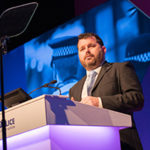 “I believe that cuts to policing, which have undoubtedly decimated neighbourhood policing across our country, have not just impacted on our ability to tackle terrorism, but have fundamentally undermined those efforts,” urged Kempton. “I believe that we’re at the stage where cuts to neighbourhood policing, and policing more generally, are a legitimate national security issue and one which this Government must reverse.”

The session questioned whether the reduction in neighbourhood policing has impacted on how police tackle extremism. Kempton was joined on the panel by Amanda Morris, community liaison officer at the Muslim Council of Britain, and chief constable Simon Cole, lead for local policing at the National Police Chiefs’ Council.

“We know from our own experience that neighbourhood policing builds trust,” added Kempton. “Trust in what we do and trust in why we do it. We know that where there are strong community links between those we serve and our neighbourhood policing teams, we’re far more likely to be able to work together to solve those community issues, rather than the police simply constantly reacting to problems and putting a plaster on them.”

Cole agreed that community policing had been affected. He highlighted that, due to the reduced number of officers since 2007, there are now more than 33 million fewer deployable police officer hours per year. This is despite evidence showing that those concerned about someone turning to extremism tend to look towards the police for help, or alternatively friends and relatives.

“Research shows that people concerned about a loved one being drawn into terrorism are most likely to want to speak to a community-based police officer,” explained Cole. “That local presence is necessary.”

Amanda Morris argued that the ‘Prevent’ agenda isn’t working and that building relationships with communities is key. “The best thing that can be done is to engage with local communities, especially so the youth,” said Morris. “A lot of Muslim organisations run schools and groups for children, so having officers go in to those schools to engage without a counter-terror focus and just talk to children about their work and build bridges would be beneficial.”