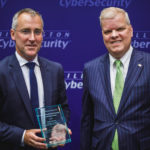 The annual summit, held at the Washington Convention Centre, brings together a range of international experts in cyber security.

Before receiving the award, Martin delivered a speech in which he reflected on the journey taken by the NCSC since he last spoke at the summit in 2016, shortly before the NCSC formally came into existence.

In the speech, Martin discussed the nature of the cyber security threats facing the UK and its allies, and how to defend against them both now and into the future.