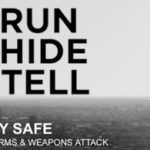 National Counter-Terrorism Policing is providing advice to members of the public on the steps they can take to keep themselves safe in the rare event of a firearms or weapons attack through the launch of a new awareness film.

Terrorist attacks in the UK and abroad remind us all of the threat level we face, which in the UK is considered as ‘Severe’ at present, meaning an attack is highly likely. The police and the security agencies are working tirelessly to protect the public, but it’s also important that communities remain vigilant and aware of how to protect themselves if the need should arise.

The police service has released a short public information film entitled ‘Stay Safe: Firearms and Weapons Attack’ which sets out the key options for individuals to remain safe should the worst happen. The film is now freely available to view online via the National Police Chiefs’ Council’s YouTube account.

The film advises those who may find themselves caught up in an incident to ‘Run, Hide and Tell’: guidance which can be applied to any place. From Case Studies and real life testimonies based on the experiences of people who have survived attacks, it’s a known fact that the advice given in the film has saved lives.

Best advice, wherever possible, is to follow the ‘Run, Hide and Tell’ guidance until the police arrive on scene. The guidance recommends to ‘Run’ if you can. If you cannot run, then ‘Hide’. When you can, ‘Tell’ the police what’s happening so they’re able to quickly summon help to stop the threat.

Also, tell others of the threat so that they don’t approach danger. However, if someone’s in immediate danger and their life is being threatened, the National Counter-Terrorism Security Office (NaCTSO) “would never criticise their actions” if instinct takes over during an unfolding episode and they feel the need to fight back.

The film has already been delivered and widely used across industry as part of police-led counter-terrorism security advice sessions for their own staff. In the same way people plan how to respond to a fire, it also makes sense to plan the response to a firearms or weapons attack. These are emotive subjects, but experience shows that, by becoming more alert to their surroundings and planning and thinking ahead, people have a far greater chance of surviving.

The intention of the film is not to unnecessarily scare members of the public, but rather to ensure that they know what steps to take in the unlikely event of being involved in a firearms or weapons attack. It’s only responsible that the police issues this public safety guidance as they would do in relation to any other personal safety issue.

NaCTSO urges the public to be alert to, but not alarmed by the threat, and reassures them that the police service carries out daily activities to help maintain the protection and security of citizens, public institutions, Critical National Infrastructure and businesses and places, including those that are potential terrorist targets.

Security measures and activities are constantly reviewed to reflect where the threats exist and the level of threat we’re facing. The level of threat is complex and ranges from lone actors intent on carrying out crude and violent attacks through to sophisticated networks pursuing ambitious and co-ordinated plots.

This increased level of activity is matched by enhanced action on the part of the police and the security services, who are working on hundreds of active investigations and making arrests every day.

Speaking on behalf of National Counter-Terrorism Policing, Metropolitan Police Service Deputy Assistant Commissioner Neil Basu said: “The police service is working tirelessly to confront the terrorist threat we all face. To do this, we do need the help of the public. We need them to be alert, but not alarmed. We need them to be vigilant and to report any suspicious behaviour or activity to the confidential Anti-Terrorist Hotline on 0800 789321 or, in an emergency, to dial 999.”

Basu added: “We’re releasing this film in the hope that it provides practical steps to take in the extremely rare event of a terrorist attack. Communities defeat terrorism, which is why we must maintain the strong relationship between the public and the police service. We depend on information from members of the public, who can be our ‘eyes and ears’ in our efforts to keep us all safe. We must also give information to the public to help them stay safe.”

NaCTSO recently launched a new publication entitled the ‘National Stakeholder Menu of Tactical Options’. The guidance document is the result of several months’ worth of consultation with the security industry and other business sectors and sets out a range of considerations and tactical responses for the private sector both in terms of planning for and reacting to a terrorist incident.

Risk UK’s readers can download a copy of the National Stakeholder Menu of Tactical Options from the GOV.UK website. This easy-to-read document includes a series of links providing access to further tactical advice, for instance on developing dynamic lockdown procedures, fashioning robust visitor and entry processes and procedures and searching buildings as well as other areas.

Undoubtedly, businesses and individuals who consider and respond to the NaCTSO Menu of Tactical Options will be in a better position to safeguard themselves and reduce injuries and fatalities should a terrorist incident occur.

Thousands of security operatives and hundreds of security businesses have already undergone Project Griffin or Project Argos training. Further information on these initiatives is also available on the GOV.UK website.