Performance in the first half of the year has been impacted by changing market conditions as clients adjust to rising labour costs and economic uncertainty. Short-term reductions in higher margin project work and discretionary spend have reduced profits in FM with weak UK business confidence affecting clients’ investment plans.

Long-term strength and the quality of Mitie’s services was reinforced by the awarding of new contracts with the Manchester Airports Group, Manchester health and justice partners, Network Rail, the Scottish Police Authority and the Scottish Fire and Rescue Service. In total, these contracts are valued at in excess of £170 million over the terms of the respective agreements.

The award of Mitie’s largest security contract with Sainsbury’s – valued at an incremental £115 million over three years – serves to underline the opportunities available for the company’s risk-based technology approach.

Improved performance is expected in the second half of the year due to enhanced revenue visibility from new contract awards and retentions, momentum in levels of project work and the anticipated incremental H2 benefits from restructuring programmes of £10 million compared to H1.

Despite this progress, due to ongoing market uncertainties, underlying earnings for FY17 are expected to be below management’s previous expectations.

Changes on the Board 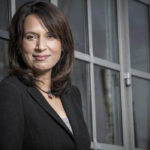 As previously announced, Ruby McGregor-Smith CBE will step down as chief executive on 12 December after almost ten years in the role to be replaced by Phil Bentley.

Speaking about this latest set of financials, McGregor-Smith commented: “The first half of this year has been difficult, but we’re not alone in facing significant macroeconomic challenges. The steps we’ve taken to counter these impacts include the restructuring of both front line and support functions across FM. Second half performance is expected to improve with our new operating model as we adapt to market conditions.”

McGregor-Smith added: “As I step down from the role of CEO, I would like to thank everyone at Mitie who has helped make this such an extraordinary place to work. Thank you also to our clients for their support over the past decade. Mitie is a great business, and I’m fully confident that it will move from strength to strength in the future.”

Roger Matthews, chairman of Mitie, responded: “I would like to thank Ruby for the significant contribution that she has made to Mitie over her 14 years on the Board, the last ten of those years having been spent as CEO. Under Ruby’s strong and passionate leadership, our FM business has been transformed with the ability to provide a broad range of services to our blue chip client base. I wish her every success for the future.”

In conclusion, Matthews stated: “I’m delighted that Phil Bentley has joined Mitie as our future CEO. Phil has demonstrated his leadership skills and strong customer focus at both Cable & Wireless and British Gas, and he has an excellent track record of delivering shareholder value.”