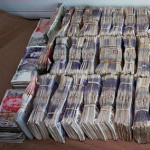 Criminals are being shown that crime doesn’t pay, with the Metropolitan Police Service revealing that it has so far seized over £21 million worth of criminal cash during this financial year (April 2014-January 2015). That’s 53% more than the amount seized in the same period for 2013-2014 .

Officers can seize £1,000 or more cash from someone under the Proceeds of Crime Act 2002 if they believe it has come from crime or is intended for crime. If the person with the cash cannot prove the money’s legitimate, that money is forfeited and then passed to the Home Office which shares it between a number of law enforcement organisations (50% goes directly to the Metropolitan Police Service).

Money can also be confiscated from criminals who have been convicted and found to have profited financially from their crime. Confiscation orders are issued by a Judge after someone has been found guilty of a crime from which they have made money. They’re directed to pay a specific sum of money back by a set deadline or else potentially face extra time in jail.

Once orders have been paid, the money is shared between law enforcement organisations including the Met, which receives 18.75% of confiscated money.

The Metropolitan Police Service has secured almost £24 million worth of confiscation orders in this financial year.

In a recent case, a Croydon drug dealer found with 1.3 kg of cocaine worth an estimated street value of £260,000 was jailed for seven years. The man was ordered to pay back approximately £900,000 at Croydon Crown Court on Thursday 6 November.

Afamdi Maduabuch Unaka, 38, of Pampisford Road told police he found the drugs in a park, but specialist financial investigators examined bank statements and other financial documents and found that he had made over £1 million from peddling drugs for more than six years. Unaka will face an extra five years in jail if he doesn’t pay the money in time.

Detective Superintendent Nick Stevens, who leads the Metropolitan Police Service’s criminal finance teams comprised of Proceeds of Crime Act specialists, said: “Getting this money out of criminal hands is integral to our fight against crime. By taking criminal cash, we are removing the reward for organised crime groups.”

Stevens added: “We are taking money intended for further criminality, and to harm communities, and instead investing it in local policing so that we can make those communities safer from these people.”

DS Stevens also explained: “We use the Proceeds of Crime Act to seize and confiscate money and to seize houses, cars and jewellery purchased with cash from crime. We’re also able to obtain orders which restrict someone’s ability to continue making money from crime once they have served their time. For example, we can orchestrate a Serious Crime Prevention Order which can dictate how many bank accounts a person is allowed to run. If they’re found to have breached the set conditions they can be sent back to prison.”