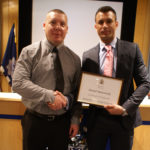 The Metropolitan Police Service has hosted its inaugural awards ceremony at New Scotland Yard specifically designed to recognise and celebrate the good work of partner organisations operating within the security business sector. The Police and Security (PaS) Awards took place on Wednesday 11 May, with the event hosted by the Met’s very own Business Crime Reduction Hub.

The PaS initiative aims to improve collaboration and trust between the private sector and the police to enhance public safety and security. It focuses on better understanding and clarity of standards and training as well as enhanced information sharing and communication, while also promoting the development and sharing of new ideas on how to collaborate effectively.

Detective Inspector Georgie Barnard, head of the Metropolitan Police Service’s Business Crime Reduction Hub, explained: “We wanted to recognise those individuals and teams in the private sector who make significant contributions to the work of the police service and the protection of the public. These awards are all the result of nominations from local police officers and serve to highlight and promote ways in which the police and the private security business sector work together in partnership on the ground.”

The PaS Awards are sponsored by the British Security Industry Association. CEO James Kelly commented: “Recognising the considerable contributions of security personnel in the protection of the public is a vital part of enhancing what’s already a very successful relationship between industry and the police service. The BSIA is proud to be involved in the PaS initiative, and looks forward to helping develop this very important programme of work over the coming years.”

Security personnel have been recognised for their achievements across five categories: Partnership and Engagement, Intelligence Sharing, Innovation, Volunteering and Outstanding Act. Details of the winners are as follows:

*Gordon Glean (Land Securities): Partnership working with police in Lewisham and the local community for more than 20 years

*Lewis Gilbert (Andrews International): One of the main contributors of intelligence to the business community 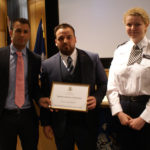 *Michael Wright (Graff Diamonds): Sharing intelligence leading to the apprehension of a gang responsible for a series of thefts from vans

*John Murphy (Valliant Security): Setting up the Alcohol Recovery Centre in order to reduce the burden placed on the Emergency Services in Kingston

*The Keyholding Company: Supporting the police and the business community with a series of ‘Smash and Grab’-focused Workshops

*Jermaine Callender (Next): Assisting police officers to safely apprehend a male in possession of a firearm

Commander Julian Bennett of the Metropolitan Police Service’s Territorial Policing Command (who opened the awards ceremony) added: “The groups and individuals nominated for these awards highlight the excellent results that can be achieved when we share information and intelligence with our security partners, and work together to prevent and reduce crime affecting businesses throughout London.”

Deputy Commissioner Craig Mackey added: “We’re committed to further improving the ways in which we work with the private security sector. To build upon this success, it’s obvious that effective partnership working is key.”

The PaS initiative developed as part of the MOPAC’s business crime strategy. Participants include private security providers, local businesses and more than 400 other stakeholders. Participation is open to all who wish to contribute. Together, those involved ensure strategic engagement and drive forward tactical front line projects.