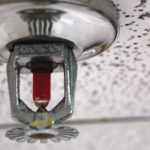 Just ahead of the Easter holiday, the London Fire Brigade (LFB) has issued a stark warning to Government education chiefs that children’s lives will be put at risk if they remove guidelines stating sprinklers should be installed in new schools. New statistics show that, although there were 718 fires in London schools between 2009 and February 2017, sprinklers were only installed in 15 of these cases. In addition, almost one-in-five of these fires were set deliberately.

Despite these figures, the Department for Education has recently consulted on proposals to make changes to guidance on safety in school buildings introduced back in 2007. The proposals remove the ‘expectation’ that all new schools would have sprinklers installed, effectively rewriting the guidance to say that sprinkler systems are not an essential requirement when considering fire safety.

Dan Daly, the LFB’s Assistant Commissioner for Fire Safety, stated: “Sprinklers are as important as smoke alarms in buildings like schools, residential care homes and sheltered accommodation. Fires can spread quickly and often silently, but sprinklers are capable of halting a fire in its tracks. We’re very concerned that no longer recognising the important role sprinkler systems can play in keeping schools safe will have potentially devastating consequences.”

Daly continued: “A fire that destroys a school not only has a huge financial impact, but it also devastates the whole community, causing huge distress and disruption to students, teachers, families and local businesses. Installing sprinkler systems in schools significantly reduces fire damage and the risk to life, while also protecting firefighters carrying out search and rescue operations by dint of limiting the spread of the fire.”

In addition to schools, the LFB is calling for the installation of sprinklers in buildings such as care homes and sheltered accommodation which house some of the capital’s most vulnerable individuals.

In conclusion, Daly explained: “We want to see all residential care homes and sheltered housing schemes fitted with sprinklers. There are around ten fires in London’s care homes every week which should be evidence enough that builders, developers, local authorities and housing and care providers need to stop ignoring the benefits to be derived from the installation of sprinkler systems.”