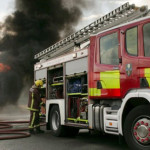 Following a public consultation exercise, the Government will now take forward legislation designed to enable Police and Crime Commissioners (PCCs) to hold their local Fire and Rescue Service to account. This is part of a raft of changes orchestrated to bring about closer working between the police, Fire and Rescue and NHS ambulance services and improve the way in which they serve local communities, protect members of the public and provide value for money for taxpayers.

The move means that PCCs could potentially create a single employer for both police and fire personnel if they’re able to demonstrate a clear business case for doing so. Blue light services will also have a new duty to work together to provide a more efficient and effective service for the public.

Mike Penning – the Minister for Policing, Fire, Criminal Justice and Victims – commented: “Strong leadership will be required to drive greater efficiencies and improved outcomes. Directly-elected Police and Crime Commissioners are clearly accountable to the public, and have a strong incentive to pursue ambitious reform and deliver value for money. We will enable them to take on responsibility for Fire and Rescue Services where a local case is made.”

Penning continued: “This is all about smarter working. It simply doesn’t make sense for the Emergency Services to have different premises, different back offices and different IT systems when their work is so closely related and they often share the same boundaries. The Government has already invested over £80 million in collaboration projects, while local areas have shown the benefits of joint working between the Emergency Services. There’s more work to be done, though, but this legislation will enable that to happen.”

The public consultation – jointly produced by the Home Office, the Department for Communities and Local Government and the Department of Health back in September last year – sought views on a range of proposals to enable greater collaboration between the Emergency Services.

The Government’s response to the consultation was published on Tuesday 26 January. Over 300 responses were received from national, local and regional organisations, police forces, PCCs, Fire and Rescue Authorities, local councils, ambulance trusts, front line practitioners, associations and other interested groups and individuals.

Having carefully considered all of the consultation responses, the Government will now legislate to:

*Abolish the London Fire and Emergency Planning Authority and give Boris Johnson, the Mayor of London, direct responsibility for the Fire and Rescue Service in the capital

The intention is that these measures will ensure collaboration is both “widespread and ambitious” across the country. Bringing police and fire together locally under the leadership of a PCC will, suggests the Conservative Government, “provide greater direct accountability for the public” and “accelerate local collaboration”.