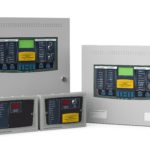 Kentec, the manufacturer of life-critical control systems, is set to launch the Sigma ZXT single-area extinguishing control panel at this year’s FIREX International (which runs from 18-20 June at ExCeL in London’s Docklands). The panel comes complete with new functionality, improved displays and multiple configuration options for a targeted response to a fire incident.

Building on hundreds of thousands of Sigma XT sales in nearly 70 countries, the Sigma ZXT provides controls and indications for a single-area extinguishing release system, enabling targeted extinguishing that limits damage and reduces costs. Three conventional detection zones provide the alarm ‘trigger’ required to activate the release of extinguishant, while the system can be configured to release the extinguishant on an alarm from any single zone or a combination of multiple zones.

A new feature on the Sigma ZXT is the event log which records event data from the panel such as alarms, faults and configuration changes, etc along with a time and date stamp. This historical visibility is critical for diagnostics, identifying the cause of alarms and faults, as well as the reasons for activations.

Up to 1,000 events can be stored within the panel which may be viewed through the LCD or can be downloaded and saved using Kentec’s LE2 software.

The system, which is compliant with EN 12094-1, can also be configured to provide two extinguishing outputs, either working together as common outputs or as main and reserved outputs. The latter results in the connection to two sets of extinguishing gas cylinders, which then enables the end user to return a system to a functional state very quickly following a release.

Kevin Swann, managing director at Kentec, stated: “The Sigma ZXT is fully-programmable through the front fascia, with clear password and access menu structures for easy configuration. The product is designed to be easy-to-use for both the installer and the end user. Single-area functionality enables targeted extinguishing that has clear cost benefits for the occupying business.”

A sophisticated and dynamic LCD, which supplements the LED status indicators, provides detailed information on panel status including fault conditions, alarm conditions and extinguishing release countdown. If dynamic mode is chosen, the display changes colour in relation to the panel status, providing immediate and clear visibility of status conditions. While not in dynamic mode, the LCD will be white regardless of status.

“To support our existing Sigma XT customers, the Sigma ZXT is fully backward compatible with the existing SI status units, as well as the ancillary output card,” added Swann. “The Sigma ZXT is a complementary development which is designed to build on the popularity of the Sigma XT range.”

A range of new status indicators that match the look of the Sigma ZXT panel fascia are also being launched, which are again fully-functional with the Sigma XT range. Status units can be located at any access point to the risk area, subsequently notifying approaching individuals of system status, as well as providing optional auto/manual key switches and manual release push-buttons.

“We’ve been very ambitious with our 2019 new product and customer offerings, and we’re very much looking forward to discussing them with existing and potential customers at FIREX International,” concluded Swann.

*Kentec will be located on Stand FX740 at FIREX International 2019