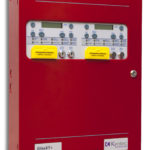 Kentec, the manufacturer of life-critical control systems, has launched the Elite XT+, a new multi-addressable extinguishant control panel designed to be easily integrated as part of a wider fire safety solution.

It features intelligent functionality to make it easier to install and use, and manages not only alarms, but also the activation of gas suppression systems via the same control panel. This is achieved via an RS45 communication channel and removes the need for a separate detection system for gas suppression.

The panel’s multi-area releasing control units contain one or two releasing modules via the master fire alarm panel. Each module can accommodate a separate hazard, defined by two specific zones. This means that gas suppression need only be activated within the required area, thus limiting the potential damage and disruption to the overall site.

“The Elite XT+’s interoperability and intelligent functionality have been meticulously designed to accommodate a wide range of fire safety scenarios, providing user convenience and the very highest standards of safety,” added Swan. “It’s also one of the first products of its kind to be listed to UL864 (10th Edition).”