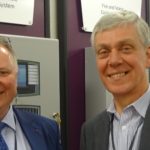 Kentec, one of the UK’s leading life safety control systems manufacturers, has appointed Kevin Swann as the company’s new managing director. Swann succeeds Kevin Restell, who’s retiring after more than 25 years with the business and its parent company, Hochiki.

Swann is an established name in the fire and security industry with some 28 years’ experience in the sector. He was closely involved in the protocol standard evolution at Apollo and has held a number of senior positions within UTC Fire and Security, namely as managing director (global) and regional manager for the UK and Ireland with direct responsibility for international growth.

Swann joins at an exciting time for the business, which has seen turnover increase by 54% under the leadership of his predecessor. The company has also doubled its manufacturing capacity, which Swann clearly recognises is an impressive legacy.

“It means that we have the perfect platform to make Kentec the world leader in open protocol and multiprotocol fire detection panels, as well as the first choice for fire extinguishing panels with our robust and industry-leading Sigma XT and Syncro XT technologies,” asserted Swann. “My immediate priority will be to focus the business on how we can make life even better for our customers, installers and partners, while at the same time maintaining our hallmark production quality.”

Outgoing managing director Kevin Restell joined Kentec at the point of its acquisition by Hochiki. He successfully supported the merger of Kentec into a large, international corporation and is immensely proud of what the company has achieved to date.

“Kentec is an end-to-end manufacturer, with everything sold being made here in the UK,” asserted Restell. “The ongoing investment in production processes and factory expansion has not only allowed the company to grow and expand its reputation for quality life safety systems, but is also a fantastic story for the wider UK manufacturing industry. I’m leaving the company in very good hands and wish Kevin the very best of luck.”

The appointment of a new managing director coincides with the 100th Anniversary of Hochiki, so too Kentec’s investment in the new generation Taktis fire panel.

“Taktis is the only open protocol and multiprotocol panel, and is already building significant momentum in the marketplace globally,” enthused Swann. “The panel is future-proofed and will continue to evolve with a highly impressive roadmap of additional functions and features.”

Kentec employs more than 230 members of staff at its head office, production facility and R&D Department located in the heart of Kent. The business currently sells to some 90 countries worldwide.