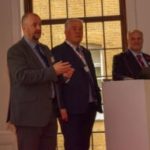 The 2018 Fire Industry Association (FIA) Annual General Meeting (AGM) and luncheon was again one of the standout industry events of the year to date, bringing together more than 300 industry leaders.

Each year, the AGM offers the ideal platform to highlight the many achievements of the FIA over the last 12 months and also signal priorities for the future. The organisation’s members mingle with industry colleagues, entertain prospective customers and catch up with the FIA’s Secretariat team. This year, comedian Ellie Taylor provided the post-lunch entertainment. 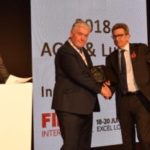 and commented: “I cannot think of anyone better connected within the fire industry than Jonathan. He has been consistent in his support for improving the resilience of the built environment and has provided educated and informed challenge where it’s due, both within the UK and on the international stage.”

The FIA’s Honorary Award signifies a member’s sustained commitment and outstanding volunteer contributions to the Association. Both Martin Harvey and David Murfitt were recognised for their long-term contribution that started some time before the formation of the FIA back in the days of the British Fire Protection Systems Association (BFPSA) and the Fire Extinguishing Trades Association (FETA). 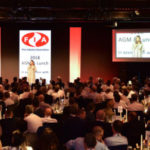 The 2018 FIA AGM and luncheon was brought to members in association with FIREX International, the UBM-organised annual fire safety solutions exhibition held at ExCeL in June.

The FIA itself is a not-for-profit Trade Association promoting professional standards in the UK’s fire safety industry.

The Association was formed in April 2007 out of the merger of the BFPSA and FETA.