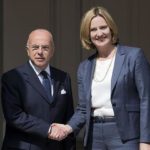 Home Secretary Amber Rudd and Bernard Cazeneuve, the Interior Minister of France, met for talks in Paris on 30 August. This first meeting since the Home Secretary’s appointment afforded the opportunity to reaffirm the intentions of France and the UK to deepen further the close working partnership enjoyed for many years as both neighbours and partners within Europe.

Effective UK/France co-operation remains crucial in addressing the shared threat faced from terrorism and extremism, as well as the current challenges posed by the migratory flows to Europe. A pledge has been made that this co-operation must and will be developed both now and after the UK leaves the European Union (EU).

A joint statement issued by both parties reads: “The terrorist attacks which have hit France, as well as other countries on the continent over the last 18 months, make our commitment to work closely together even more important. In recognition of the ongoing terrorist threat to France and the UK:

*British and French security and intelligence agencies will continue to strengthen links through the sharing of intelligence and closer working on investigations
*we will deepen our collaboration on radicalisation, including through further exchanges of good practice and experience between experts
*we will support better regulation and control of the acquisition and possession of weapons within the EU, including by adopting as soon as possible the revised firearms directive and tackling weapons smuggling through the Balkans
*we will continue to work closely to counter any potential threats to maritime and aviation security
*we will prioritise information sharing between all Member States in order to meet the threats facing us (this means ensuring the interoperability of EU and international databases in addition to the full use and implementation of all available tools)
*we call for all Member States to implement the EU Passenger Name Records Directive without delay and include, as agreed, charter flights and intra-European flights
*we call for the reinforcement of external borders through improved information sharing, enhanced security measures and the systematic use of all available databases
*recognising that encrypted communication used by terrorists is a real challenge, we’re committed to share Best Practice and innovative ideas on how best to respond, and we call on those who have not yet signed and ratified the Budapest Convention on Cyber Crime to do so as soon as possible”

Addressing the situation in Calais

In the face of the challenges posed by ongoing migratory flows in Europe, and taking into account the migratory pressure in the Calais region and the particularly difficult humanitarian situation, both the UK and French Governments are committed to working together to strengthen the security of their shared border, strongly diminish the migratory pressure in Calais and preserve the vital economic link supported by the juxtaposed controls in Calais.

The joint statement reads: “In the coming months we will continue our close co-operation to resolve the situation in the Calais region by further securing the ports and tunnel. A total of 100 million Euros has already been provided by the British authorities to reinforce security. Work will be taken forward rapidly on priorities identified in the regular joint UK-France security reviews. Moreover, over the last year, the French authorities have been providing 1,000 police and gendarmes day and night to prevent intrusion and protect people and goods inside and around the tunnel and port areas. This scheme has been recently reinforced with 160 additional officers.”

The statement adds: “We shall continue our close co-operation in order to bear down on the organised crime gangs exploiting the vulnerable. 28 criminal networks were disrupted in 2015, and an additional 28 since the beginning of this year.”

Both countries recognise the humanitarian situation in Calais and the need to step up joint efforts to improve that situation. Rudd and Cazeneuve have agreed to continue their close co-operation in all fields covered in the joint ministerial declaration of August 2015 and investment efforts designed to protect the shared border. The additional work in this respect will reflect the outcome of the UK-France security reviews and the steps that need to be taken (including by the UK) to continue to manage the common border in an effective and efficient manner.