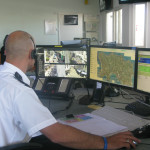 Inside the States of Jersey Police CCTV Control Room

Milestone Systems’ XProtect Corporate and Inter-Connect are helping to deliver a highly secure and flexible platform for permission-based access to over 90 CCTV cameras managed by the States of Jersey Police.

Located just 22 kilometres off the coast of Normandy in Northern France, Jersey is the southernmost and largest of the Channel Islands. It enjoys unique Crown Dependency status, being both protected by United Kingdom from a military perspective while at the same time remaining independent of it.

The States of Jersey Police serves a resident population of 97,800 people as well as over 700,000 visitors to Jersey each year. The force needed to improve the quality and reliability of the ageing CCTV system being managed across Jersey’s town centre, airport, harbour areas and at its own headquarters-based Custody Suites.

The force – which is led by chief officer Mike Bowron QPM – also wanted to enable specific police officers to have secure access to relevant cameras that would assist them in tracking suspects between the island’s key entry points with a view to reducing crime on a substantial level.

To this end, early last year the States of Jersey Police bid for – and duly secured – £400,000 worth of financial backing from the Criminal Offences Confiscation Fund for the purposes of CCTV systems upgrading. This Jersey-specific fund, which pools assets seized by the authorities in the course of crime prevention, can be used for projects which have a proven link to the prevention and suppression of criminal conduct.

Configuration of the CCTV

The States of Jersey Police’s nine-strong IT Department, which led the project to upgrade and bring the four separate CCTV systems together, worked directly with Milestone Systems’ Professional Services team on configuring the surveillance regime to meet specific requirements.

As well as upgrading the CCTV cameras to IP video in the town centre, at the harbour and the airport, the States of Jersey Police also wanted to bring all of these previously separate systems into one single centralised video management system based at its headquarters in Rouge Bouillon, St Helier.

Members of the IT Department specified an IP-based, open architecture video management software (VMS) platform which could provide highly secure, role-specific, desktop PC access to over 90 cameras across these four discrete systems. 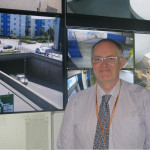 Ian Robins: communications infrastructure manager for the States of Jersey Police’s IT operation

Ian Robins, communications infrastructure manager for the States of Jersey Police’s IT operation, told Risk UK: “We had more than 80 potential end users of the combined system , but some officers only need access to specific cameras. Some need to control the movement of the new external PTZ cameras down in the town centre while others do not. Others required to access recorded video. Some only needed access to live images according to their roles and seniority. We needed to control these permissions through our existing IT infrastructure using Active Directory.”

Following on from a detailed review of all the key VMS players’ current solutions, Milestone Systems’ XProtect Corporate proved to be the most resilient and flexible open video management solution for the States of Jersey Police.

Milestone’s VMS enables highly secure, permission-based access to images: all set up and managed via Microsoft Active Directory. Milestone Inter-Connect provides highly resilient integration with all four XProtect Express VMS, which themselves manage and record video data linked to the four separate CCTV systems based at the harbour, airport, in the town centre and within the force’s headquarters.

A total of 22 new IP cameras were deployed at Jersey Airport in April 2014. A further 26 IP cameras replaced the ageing CCTV cameras in the harbour area of St Helier in June.

For its part, Milestone XProtect collects continuous recordings from all town centre cameras which are set to operate at 25 frames per second.

Ninety days of recordings are held on a 90 Tb HP 3PAR StoreServ 7000 server. The XProtect Xpress VMS is configured on four local servers located in the areas they serve and is able to hold video recordings for 31 days. 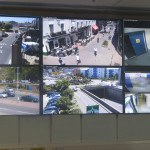 The States of Jersey Police has been able to upgrade and integrate disparate CCTV systems covering the island’s harbour, town centre, airport and the rest of the force’s estate

“Milestone’s XProtect Corporate solution affords the centralised management and control of our new island-wide video management system,” continued Ian Robins, “while Inter-Connect provides guaranteed integration with previously separate CCTV systems covering the airport, harbour and force headquarters. Milestone has provided the technology and, most importantly for us, the technical support as part of a five-year servicing contract that we agreed with the company to give us great peace of mind should we ever need to make configuration changes, upgrades or extensions to the system. We’re very happy with both the technology platform and the support provided to date.”

The States of Jersey Police’s headquarters has seen a major upgrade of its CCTV Control Room. A new six-screen video wall complete with a 42-inch NEC Hiperwall displays high resolution images driven by Milestone’s XProtect Smart Wall. Operators in the Control Room determine which camera images are displayed on both their desktop and the video wall during incidents by dint of employing a simple Milestone XProtect user interface controlled by a standard keyboard and mouse.

The States of Jersey Police has been able to upgrade and integrate disparate CCTV systems covering the island’s harbour, town centre, airport and the rest of the force’s estate. All of the video intelligence has now been brought together to deliver centralised management and maintenance efficiencies while at the same time actively supporting the force’s goal of making Jersey a safer place in which to live and a safe destination for tourists and visitors.

“Milestone’s XProtect Corporate and Inter-Connect combination has enabled us to bring together four separate systems in one place,” concluded Ian Robins. “The set-up we now have in place enables us to tightly manage access to images in line with our existing IT system’s authorisation and authentication regime. It also provides individuals with role-based access to specific types of video data in accordance with their job descriptions and seniority.”

He added: “Milestone’s XProtect gives us the intelligence at the centre which enables us to pull in feeds from multiple cameras and display them on our new video wall for further investigation by trained officers, who can then brief those police officers on the ground in terms of where criminality is in progress or a suspect is on the move.”

Security services partnership with The National Gallery announced by Securitas

Tackling the Power and Data ‘Capacity Crunch’: “Security sector must play its part”