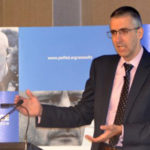 Elizabeth France CBE, chair of the Security Industry Authority (SIA), has announced the appointment of Ian Todd FRSA FCMI as the Regulator’s new chief executive. Todd succeeds Dave Humphries who has served as interim CEO since the departure of Alan Clamp at the end of October. Todd will join the Regulator on Monday 25 February.

Todd joins the SIA from the Independent Office for Police Conduct (IOPC) where he’s currently deputy director general. This builds on a number of Todd’s Board-level roles in professional regulation, including appointments within the health and legal sectors. He has also spent time in central Government, including at the Cabinet Office.

Todd boasts extensive experience of dealing with the public in a front line role as his first career was with the Ambulance Service. Throughout his near 15 years with the NHS, he was a qualified paramedic and held a number of roles up to director level, including as part of the Gold Command Team during 7/7.

Commenting on the appointment, Elizabeth France said: “I’m delighted to welcome Ian as the SIA’s next CEO. He joins us with an excellent track record in leadership and organisation development. We look forward to working with him. Ian will build on our work with Government, the private security industry and our other stakeholders to maintain a focus on public protection and ensure that the SIA continues to improve the services provided to licence holders and security businesses. I’m confident Ian will enjoy the challenge of delivering effective regulation in a changing environment. He will carry forward our Strategic Plan and build on our successes to ensure continuity and progress across all areas of the SIA’s work.”

France added: “I thank Dave Humphries for his steady leadership since Alan Clamp’s departure last October. He has ensured that the SIA has continued to move forward strategically and operationally.”

Dave Humphries will continue at the helm until Ian Todd arrives at the end of February.

Ian Todd commented: “I’m excited to be taking up the post of CEO at the SIA and look forward to drawing on my experience to drive the SIA’s strategic direction and strengthen its regulatory role. The SIA plays an important role in protecting the public and improving standards in the security industry. I look forward to working with the Board and staff at the SIA, as well as external stakeholders and partners. I’m committed to building on the good work of the organisation and ensuring that the SIA continues to be seen as an effective and efficient Regulator.”