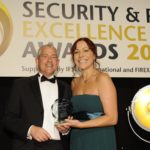 Two industry leaders – namely Paul Tennent and Tony Maskens – have been recognised by the Fire & Security Association (FSA) at the IFSEC Security and Fire Excellence Awards 2017 for their outstanding contributions to their respective industry sectors.

Paul Tennent – co-founder of Tavcom Training and Group sales director at the Linx International Group – scooped the FSA’s 2017 Peter Greenwood Security Award. Tennent has been recognised for his commitment to raising standards (by dint of diligent work with the CCTV User Group and National Occupational Standards, among others) and delivering high quality training. Tennent is an internationally-respected professional, with Tavcom Training boasting major clients in countries including Dubai.

Recently, Tennent has been one of the principal architects behind the creation of the professional register for Certified Technical Security Professionals that launched back in early September.

Commenting on the award, Tennent told Risk UK: “Well-trained and dedicated security professionals are the lifeblood of our industry. It’s with a sense of great responsibility that we provide access to the latest knowledge and skills needed for those working in the professional technical security sector. I’m immensely proud that Tavcom Training is recognised as the world’s leading provider of BTEC-accredited security systems training courses. I receive this award on behalf of my entire team.”

Greenwood was a former head of the ECA’s Security Group and involved with its Fire Group, and was also a founder member of the Security Industry Lead Body.

Tony Maskens, who served as BAFE’s technical schemes manager until his retirement in 2016, has won the FSA’s Ian Marsh Fire Award for 2017. Maskens picked up the award for his efforts to raise industry standards, enhance quality control schemes and promote third party certification to companies and end users.

The Ian Marsh Fire Award recognises individuals who demonstrate enthusiasm and selfless concern for the fire and emergency systems industry. The award was renamed in honour of Ian Marsh in 2013, the year after he died from illness. Marsh made a major contribution to the industry, having an active involvement with both British Standards and the Wiring Regulations, as well as enjoying a pivotal role in the creation of certification body ELECSA. 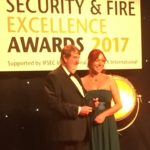 Steve Martin, head of the FSA and the ECA’s director of technical, commented: “Many congratulations from the FSA to both Paul Tennent and Tony Maskens on winning these awards. With the FSA celebrating its 10th Anniversary this year, we’re delighted to have two such fantastic ambassadors being recognised.”

The FSA’s awards are supported by industry bodies including the National Security Inspectorate (NSI), the Security Systems and Alarms Inspection Board (SSAIB), the Fire Protection Association and British Approvals for Fire Equipment (BAFE). Representatives from the FSA, the ECA, SELECT, the NSI and the SSAIB were among the Judges assessing the nominations for the two individual awards.

The FSA consists of member-firms of the ECA, the leading electrotechnical and engineering services trade body, as well as the aforementioned Scottish electrical trade body SELECT.

Organised by UBM in conjunction with Revolution Events, the IFSEC Security and Fire Excellence Awards 2017 ceremony was held on Wednesday 22 November and attended by industry leaders including business owners and clients.