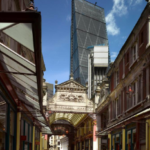 Incentive Lynx, which is part of the Incentive FM Group, recently played a vital role in an important counter-terrorism training exercise conducted by the Metropolitan Police Service and the City of London Police. The security specialist welcomed representatives from the two forces to The Leadenhall Building in the Square Mile to carry out the practice mission involving multiple hostages and casualties.

More than 200 participants took part in the exercise, among them police officers, the Incentive Lynx on-site team members – who were tested on how they would react during an emergency situation – and the people who played the hostages and casualties. There were around 40 firearms officers involved along with their trainers from SCO19 (Specialist Firearms Command).

Incentive Lynx has delivered a bespoke 24/7 Front of House security solution at The Leadenhall Building since 2015. A team of 40 security officers are tasked with providing an exceptional guest experience in conjunction with a safe and secure environment. They’re on hand to welcome and assist any workers and visitors arriving at the 224-metre tall building, as well as patrolling the boundaries of the building, which is home to a wide number of the UK’s leading businesses.

Stephen Waud, managing director of Incentive Lynx, said: “We’re extremely proud to help both forces come together and take part in this vital training exercise, which is designed to ensure the safety of all those people who live and work in London, as well as the millions of tourists that visit each year. Our officers assisted with the treating of casualties and keeping the building, its occupants and the public safe. It was an extremely valuable experience.”