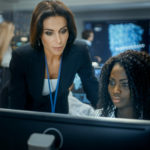 NTT Security, the specialist security company and Centre of Excellence in security for the NTT Group, has launched its inaugural Women in Cyber Security Awards as part of an initiative to recognise and inspire talented female professionals and newcomers in the cyber security industry.

The new awards, developed in partnership with Global Digital Women, will recognise the voices of females in cyber security across Europe and change perceptions of them as well as inspire young women to consider a career in the sector. With women representing 26% of NTT Security’s workforce in Europe, the project also forms part of NTT Security’s long-term drive to improve upon the gender gap.

The awards are open for entries from now until 16th August in the DACH region (Germany, Austria and Switzerland) and until 13 September in Northern Europe: the UK, Benelux and the Nordics. Finalists will be chosen by a panel of independent experts, with the winners announced at Information Security World in Vienna on 17th September and London on 15th October.

Kai Grunwitz, senior vice-president for NTT Security in EMEA, said: “For as long as anyone can remember, the industry has suffered from a major gender imbalance problem. When viewed in the context of the global cyber skills shortages, it’s clear we’re reaching crisis point. With the new Women in Cyber Security Awards, we have made it our mission to give talented women in our industry the visibility they deserve and thank them for the work they do every day in this field. We also want to encourage more women to make a name for themselves in cyber security. There are already a lot more female role models out there today, but there’ still a long way to go. We still don’t have enough women working in the industry and recruiters are failing to deliver on diversity promises.”

The latest figures put the global cyber security skills shortfall at 2.9 million professionals, with women occupying just under a quarter (24%) of roles. This is an improvement on the 11% previously estimated. Furthermore, men still dominate the industry all the way to the top, occupying a large majority (87%) of CISO roles at Fortune 500 firms.

Grunwitz concluded: “Our industry needs to continue pushing for more women in cyber security. While the gender diversity problem will not change overnight, we hope NTT Security’s new awards will help increase the visibility of the profession among females.”

*To learn more about the Women in Cyber Security Awards visit http://www.women-in-cybersecurity-awards.com/en/