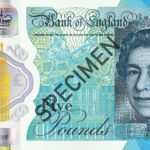 The advent of the new plastic £5 banknote heralds “an exciting opportunity” that showcases leading-edge developments in security devices for currency applications. That’s the considered view of the International Hologram Manufacturers Association (IHMA), the dedicated trade body for the global hologram industry.

Introduced by the Bank of England in September following a period of public consultation, the new £5 note will be manufactured from a hard-wearing and durable polymer. The IHMA is also looking ahead to the new £10 and £20 notes that will follow as the old cotton fibre and linen rag banknotes are removed from circulation and destroyed.

The polymer editions are made from a thin, transparent and flexible film fashioned from polypropylene that’s coated with a lacquer layer that enables them to carry the printed design features of the banknote. This will allow the inclusion of windows or clear portions in the design. These are used to provide enhanced protection and feature holograms for verification and anti-counterfeiting purposes.

Other countries – including Canada, New Zealand, Romania and Vietnam – have been using polymer banknotes featuring holograms for years. As the UK now adopts banknotes featuring the same technology, the move has to be seen as another example of how holography continues to evolve as the leading security feature for notes.

Holograms have featured successfully on banknotes since 1987, and have progressed since then from being simple patches to complex stripes as integral design and print features on notes. Today, the annual global volume of banknotes produced is in excess of 125 billion*, so the reward for hologram developers capable of providing the technology to overcome the technical challenges is (potentially, at least) highly lucrative.

Dr Mark Deakes, general secretary of the IHMA, believes that the new £5 note opens an exciting chapter for security holograms. “Holography is an effective weapon in the battle to thwart banknote counterfeiters,” urged Deakes, “continually evolving as an effective first line of defence. The new £5 note is a great example of this evolution, and illustrates some of the best and most technically innovative holograms on banknotes which combine with other features to deliver value added solutions. Like their paper counterparts, polymer substrates are now benefiting from this type of technology. The Bank of England is among those leading the way with banknotes that combine improved durability with the very best in modern hologram technology.”

The success of holograms for both polymer and paper banknotes has been down to their role as a Level One security feature that’s instantly recognisable. The technology remains to the fore as part of an array of overt features, making it easy not only for members of the general public, but also cashiers and those operating cash tills in stores to recognise whether or not a banknote is bona fide.

Increasing adoption of holography on banknotes reinforces the hologram’s position as a pre-eminent security feature in the global anti-counterfeiting battle. The use of sophisticated anti-counterfeiting features means that the banknotes are more secure because they include a larger area for holograms to be featured. For its part, New Zealand was among the countries that reported a fall in counterfeiting after it introduced new hologram banknotes.

The artwork on the new £5 bank note also includes:

*Churchill’s declaration: “I have nothing to offer but blood, toil, tears and sweat” (which came in a speech at the House of Commons on 13 May 1940)

There are more than 329 million £5 notes in circulation at the present time, so it will take a year for the Churchill note to fully replace the current one featuring the social reformer Elizabeth Fry.

The IHMA – www.ihma.org – is made up of 100 of the world’s leading hologram companies. IHMA members are the leading producers and converters of holograms for banknote security, anti-counterfeiting, brand protection, packaging, graphics and other commercial applications around the world. Member companies actively co-operate to maintain the highest professional, security and quality standards at all times.