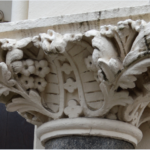 The event was led by Mark Harrison FSA, national policing and crime advisor with Historic England, and set out to gather experts from many fields to propose ways in which heritage crime – and in particular that perpetrated against churches – can be fought.

Many techniques to fight metal theft already exist, such as those provided by BSIA members and outlined in the BSIA’s guide to the Security of Heritage Properties (Form 188). These can include practical and procedural methods undertaken by property owners together with electronic security, such as burglar alarms, roof alarms and CCTV and property marking (notably that which includes forensic markers). The latter acts as a strong deterrent to thieves.

A significant difference with heritage crime compared to other crimes is the way in which it affects the wider society and not just the owner. Although the monetary cost can be great, it’s the emotional aspect combined with the loss to our civilisation of historically important materials and information that’s often of greater concern.

A major part of the Workshop was the consideration of the theft of lead roofing from churches which has become increasingly common. Thieves can rapidly remove lead from roofs that yields only a few hundred pounds, but can cost thousands to repair and result in damage to churches easily reaching £40,000 to £100,000 if the interior is then affected by rain or snow. Frequently, the damage is irreparable.

It was noted that people often associate churches with important events in their lives such as marriages, christenings and funerals and that wilful destruction of these properties brings with it emotional upset. Additionally, criminals often damage graves and headstones as they go about their attacks, having no concern for the impact this has on the family and friends of the deceased.

In some instances, sentencing guidelines now allow for the heritage aspect of the crime to be taken into account, but this isn’t always the case. Participants at the Workshop voiced their hope that this could be extended.

The BSIA looks forward to initiatives based on the outcomes of the Workshop to combat heritage crime that causes great annoyance and emotional upset to the community at large, as well as loss to property owners.