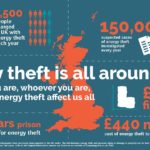 In what is an unprecedented ‘first’ for Crimestoppers, the organisation has launched a dedicated service encouraging members of the public to report any suspected cases of energy-related crime. With 150,000 instances of energy theft investigated every year, the charity aims to inform the public of the consequences of such theft and appeal for information on where it may be occurring.

Crimestoppers has partnered with the industry to launch the Stay Energy Safe initiative and host a ‘first of its kind’ anonymous service for the public by which individuals can report suspected energy crime. This follows rule changes introduced by energy regulator Ofgem that require the industry to clamp down on energy theft.

The new service urges businesses, landlords, tenants and members of the general public to report any suspicions or evidence of energy crime, either through the website or via the dedicated telephone Hotline on 0800 023 2777.

As part of the new service, the national charity is working with all 96 of the UK’s energy providers and distributors to launch this dedicated anti-energy crime Hotline and urges the public to provide information and, subsequently, help ‘pull the plug’ on this form of criminality.

Ofgem states that the reported cost of energy theft to the UK public is around £440 million per annum. This would be enough to power over 400,000 homes. That said, tampered and bypassed meters are costing the UK more than just money. The risk to life and property is very real as some seek new ways to cheat the system.

One reported incident in Glasgow saw an elderly and housebound woman tragically lose her life following a fire that was caused by a meter that had been tampered with by her son, who also lived in the property. The woman died of smoke inhalation, and the son was eventually prosecuted. The energy company in question subsequently visited other flats in the block of eight and found another four with a similar type of by-pass operation in place.

Around 1,500 people in the UK are charged by the police for energy theft each year. If found guilty, they’re likely to have to pay back the value of the energy stolen, plus the costs of the investigation, but the outcome can also include community service (or even a prison sentence of up to five years).

In one incident, an energy supplier was called in by police to help investigate a restaurant that was still trading, despite having had its electricity cut off since 2013. It was found that five other properties owned by the same individual had recently been raided, revealing a number of dangerous activities including the following:

*a gas meter had been illegally removed, which resulted in the restaurant being evacuated and secured

The restaurant was shut down. Police arrested the restaurant owner for energy theft and other offences, including possession of stolen goods and growing cannabis.

It’s incidents like those listed above, potentially resulting in fatal consequences, which Crimestoppers and the energy industry are asking for the public’s help to reduce.

Clamping down on energy crime

Crimestoppers’ CEO Mark Hallas said: “It’s no exaggeration to say this is a groundbreaking agreement that we’ve forged with the energy industry to ensure that crimes such as meter tampering are clamped down on. This isn’t just about supporting the industry, though. It’s about our duty to the communities with which we work. Explosions and fires as a result of energy theft can be devastating, which is why we’re running this service on behalf of the industry. It’s about ensuring that our streets are safe.”

Dermot Nolan, chief executive at Ofgem, commented: “Energy theft costs the UK hundreds of millions of pounds each year and puts people’s lives at risk. This is why we’re working with the energy industry to clamp down on this form of crime. We’re urging the public to use the Hotline and pull the plug on energy theft once and for all.”

Paul Fuller, chief fire officer for Bedfordshire Fire and Rescue Service, is supporting the campaign. “We had a near fatal case of energy theft in Bedfordshire earlier this year,” said Fuller, “when a flat in a high rise building was found to be housing a tampered meter. Thankfully nobody was injured, but they could have been. I’m keen to back this service being launched by Crimestoppers because I’ve seen first-hand the impact a fire can have as a result of a tampered meter.”

*To report an incident of energy crime call the Energy Safe reporting service on 0800 023 2777 or fill out the anonymous, non-traceable form