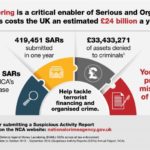 Serious and organised crime costs the UK an estimated £24 billion every year. Money laundering not only allows criminals to hide the proceeds of their crimes, but also helps to fund further criminal activity. In its latest report, the Government has set out the threats posed by money laundering and is now re-launching the ‘Flag It Up’ campaign to raise awareness and show how this form of criminality can be stamped out.

Headed by the National Crime Agency, ‘Flag It Up’ is a joint campaign between the Government, the legal and accountancy sectors that aims to raise awareness of the tell-tale signs of money laundering and the risks for firms and professionals of being caught in this form of financial crime.

Elizabeth Baker, head of proceeds of crime at the Serious Fraud Office, has spoken to ‘Flag It Up’ about the tell-tale signs of money laundering and how individuals can help catch criminals trying to commit it through using Suspicious Activity Reports (SARs).

Tell-tale signs can include a long-term client who starts making requests that are out of character, a client repeatedly asking for services outside your (or your firm’s) area(s) of expertise and a client requesting arrangements that don’t appear to make commercial sense. Always remember that ignoring any suspicious activity potentially places you and your firm at risk and fuels further crime.

SARs are the missing piece of the intelligence puzzle that you can provide. They’re critical in tackling money laundering, serious and organised crime, corruption and fraud and provide valuable information from the private sector that would otherwise be invisible to law enforcement officials.

SARs can often provide immediate opportunities to stop crime, arrest offenders or freeze assets and, crucially, contribute towards the UK’s overall ability to assess and fight the threats posed by economic crime. The more information and intelligence provided, the easier it is for law enforcement to identify methods used by criminals and proactively take steps to catch the perpetrators of crime and protect the public.

Failing to take action over suspicious activity could result in you or your firm being subject to a criminal investigation. Even if charges are not brought, you could spend significant time answering questions from law enforcement officials or regulators and away from your other clients.

Worse still, an investigation could result in serious reputational damage if suspected criminal activity is confirmed and may have far-reaching commercial impacts if you’re no longer able to bid for certain types of contracts.

In June last year, the Government implemented the Fourth Money Laundering Directive, in turn strengthening the UK’s already strong anti-money laundering legislation to ensure that we’re keeping pace with the changing face of financial crime. However, only if those in the legal and accounting sectors continue submitting the crucial SARs needed to close the intelligence gaps will the authorities be able to shut down the criminal networks that support serious and organised crime for good.