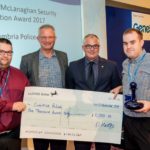 The Gordon McLanaghan Innovation Award is bestowed annually in memory of the popular Bristol City Council CCTV and Emergency Control Room manager Gordon McLanaghan. It recognises those who have gone above and beyond the Call of Duty to overcome resistance in order to achieve a technical security solution that’s both unusual and highly effective.

The independent Judging Panel for the 2017 award was chaired by Professor William Webster of Stirling University, who’s also the director of the Centre for Research into Information Surveillance and Privacy.

The award was presented at Global MSC Security’s charity dinner, held on Monday 13 November at The Bristol Hotel in Bristol, in front of an audience of 98 security professionals from the public and private sectors.

“Cumbria Constabulary is a deserving winner of the 2017 Gordon McLanaghan Innovation Award,” enthused Derek Maltby. “It’s a pleasure to recognise the force with the highest accolade that Global MSC Security can bestow.”

The business exists to deliver the best possible results for an organisation’s security investment. The combination of its law enforcement, architectural, engineering and IT backgrounds means that Global MSC provides the right integrated security solutions.