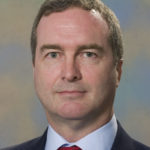 Robert Hannigan, director of GCHQ since 2014, has announced his decision to step down once a successor is in place. In an exchange of letters with the Foreign Secretary, Boris Johnson, Hannigan explained that his decision has been made due to personal reasons.

Hannigan stated in the letter to Johnson that he’s proud of what GCHQ has achieved since 2014, not least setting up the National Cyber Security Centre and building greater public understanding of intelligence work. “I’m equally proud of the relentless 24-hour operational effort against terrorism, crime and many other national security threats,” said Hannigan.

Continuing that theme, Hannigan commented: “While this work must remain secret, you will know how many lives have been saved in this country and overseas by the efforts of GCHQ. Underpinning this effort is our world-class technology and, above all, our brilliant people.”

Making his mark on the organisation, Hannigan has been responsible for initiating the greatest internal change within GCHQ for 30 years, and feels that the operation is “now well on the way to being fit for the next generation of security challenges” posed to the UK in the digital age.

Hannigan told Johnson: “After a good deal of thought, I have decided that this is the right time to move on and allow someone else to lead GCHQ through its next phase. Like you, I’m a great enthusiast for our history and I think it’s right that a new director should be firmly embedded by our centenary year in 2019. I’m very committed to GCHQ’s future and will of course be happy to stay in post until such time that you’ve been able to appoint a successor.”

Hannigan has enjoyed numerous public service roles over the last two decades, encompassing positions within the Cabinet Office and the Foreign Office. “They have all demanded a great deal of my ever-patient and understanding family, and now is the right time for a change in direction.”

Response from the Foreign Secretary

In responding to Hannigan’s resignation, Boris Johnson wrote: “You have led the renewal of some of our most important national security capabilities, which we continue to depend upon every day to save lives from terrorism and to protect our interests and values. You also set the groundwork for a major transformation of our cyber defences, and set GCHQ on a path to meet the challenges of the future with your focus on technology and skills.”

Johnson added: “Following your successful tenure in office, and thanks to the work of thousands of excellent GCHQ staff members, the organisation is well placed to play its part in continuing to protect our nation. I wish you the very best for your future career.”

In line with normal practice, there will now be an internal competition within Government to identify candidates to succeed Hannigan for onward recommendation to the Foreign Secretary and the Prime Minister Theresa May. In the meantime, the director and the Board at GCHQ will continue to oversee all of the department’s vital work.