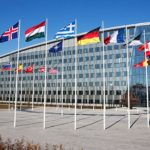 During his visit to NATO headquarters in Brussels on Tuesday 19 June, GCHQ’s director Jeremy Fleming talked about countering global threats, the importance of European partnerships and the benefits of collective security. After meeting with the NATO secretary general Jens Stoltenberg, the deputy secretary general and American diplomat Rose Gottemoeller and various ambassadors, Fleming issued a statement.

Fleming was in Brussels to speak with the 29 NATO ambassadors and EU colleagues about the range of challenges to be faced and how all parties can work together to tackle them. The visit occurred at a pivotal juncture, with the UK preparing to exit the EU and as the terms of a treaty on security are agreed to ensure that the UK and EU Member States continue to work together for a secure future beyond Brexit.

“Protecting our nations and our people, in both the physical world and online, is becoming even more complex,” stressed Fleming. “The range and diversity of threats we face is growing. Daesh is using slick online platforms to inspire and recruit a new breed of terrorists. They’re motivated by the power of the media to promote, recruit and inspire and are more aware of the capabilities which organisations like GCHQ can deploy to disrupt them. Criminal gangs have developed sophisticated online schemes to defraud people and businesses on a huge scale, and ransomware puts the data at risk that underpins the running of all our businesses.”

On top of that, conflict zones have become somewhat more unpredictable, with adversaries that are flouting the usual rules of engagement.

“Together,” continued Fleming, “we’re also facing an increased threat from aggressive foreign powers combining military provocation, cyber intrusion and disinformation to impose their agendas. The Russian Government has shown its blatant disregard for the consequences of its actions. The response to the attack in Salisbury shows this is a concern that we all share with our allies here. These threats are more complex and more global and none of us can defend against them alone. They require a pooling of resource, expertise and, critically data, such that we can investigate and disrupt our adversaries.”

Fleming is rightly proud of the role that GCHQ plays in global security. “We counter hostile states, which is increasingly important given the behaviour we’ve seen online and in the physical world. I’ve expressed my thanks to the large number of allies who stood with the UK as we called out Russia for its attack on Sergei and Yulia Skripal, which was the first time a nerve agent was deployed in Europe since the Second World War.”

GCHQ helps counter terrorism, including through a major offensive cyber campaign against Daesh. “I believe this had significant success in suppressing Daesh propaganda,” highlighted Fleming, “hindered their ability to co-ordinate attacks and protected coalition forces on the battlefield. It meant that, in 2017, there were times when Daesh found it almost impossible to spread its hate online, to use its normal channels to spread its rhetoric or trust its own publications.”

GCHQ supports law enforcement in the fight against serious and organised crime. Last year, GCHQ’s efforts helped with the seizure of over 19 tonnes of cocaine destined for Europe with a street value of over £1 billion.

GCHQ is also a global leader on cyber security. This work is led by the National Cyber Security Centre, as part of GCHQ, which has the mission of making the UK the safest place in the world to live and work online. GCHQ has worked with its European colleagues to share understanding of how to protect democratic elections. It has also unmasked aggressive behaviour in cyber space to better help businesses and protect citizens.

Over the last 12 months, GCHQ has hared classified cyber threat intelligence with the majority of NATO member states and, of course, at NATO headquarters as well.

Everything depends on partnerships 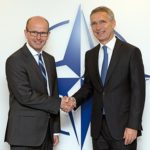 “Almost everything that we achieve in GCHQ is dependent on our partners,” outlined Fleming. “In the UK, that means our colleagues in MI5 and the SIS, law enforcement agencies and our military partnerships. Overseas, it includes the long-standing and deep partnership with the US and the other ‘Five Eyes’. Of course, it also includes the increasingly strong partnerships we have with all of our European allies.”

Fleming stated: “We’re leaving the EU, but not Europe. After Brexit, the UK will continue to work with the EU and the EU Member States. We have excellent relationships with intelligence and security agencies right across the continent. For example, in the last year we’ve played a critical role in the disruption of terrorist operations in at least four European countries. Those relationships, and our ability to work together, save lives. That will continue after Brexit, for the benefit of both the UK and Europe.”

GCHQ’s intelligence supports its ability to mount global operations and investigations, including into areas of the world where it’s difficult to operate. Close support to NATO operations, intelligence insight and the championing of NATO cyber transformation speaks to how GCHQ has partnered, and will continue to partner, with its allies.

Fleming added a note of caution. “A defensive capability is only one side of the coin. A comprehensive approach also requires offensive capabilities. The UK Government has made it clear that we’re ready to bring our offensive cyber capabilities to bear – such as those we’ve used so effectively against Daesh – for the benefit of our allies. I’m pleased that GCHQ is helping to shape the conversation about offensive cyber here at NATO.”

As far as Fleming’s concerned, it’s also important that, post-Brexit, there are mechanisms in place that allow the sharing of insight and expertise. “We mustn’t let the sharing of intelligence information lag behind the pace of the threat,” he urged.

The legislation that underpins GCHQ’s work, namely the Investigatory Powers Act, is “world-leading in its transparency”, asserted Fleming, and features rigorous oversight mechanisms such as the new ‘double lock’ that will see all warrants sought being approved by both a Secretary of State and a senior judge.

“The nature of our role brings with it responsibilities to show how carefully we treat the data and, in doing so, the privacy of those to whom it relates,” said Fleming. “We take that responsibility extremely seriously.”

In closing, Fleming highlighted: “We’ve all benefited so much in Europe from our work together on our collective security. I’m confident that this will continue after Brexit, and I look forward to working with our European and NATO partners on how we can best ensure that it does.”