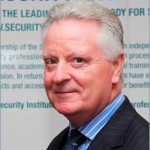 Garry Evanson CSyP: the new Chairman of The Security Institute

The Security Institute’s Board Meeting held on Tuesday 14 April witnessed Emma Shaw CSyP standing down as chairman of the organisation after two years in office to be replaced by Garry Evanson CSyP.

Garry Evanson BA MSc PgDip PGCE MCGI CSyP FSyI is head of security and emergency planning at Westminster Abbey, a role he has held since February 2012. The Abbey, of course, is an iconic living Church, a designated World Heritage site and a ‘Royal Peculiar’ where the Dean is directly responsible to the Monarch.

All coronations have taken place in the Abbey since 1066. The Abbey is also a major London tourist attraction and a favoured venue for high profile ‘events’, not only for special national occasions but also garden parties and conferences as well as major landmark religious services and Royal Weddings.

For the past decade, Evanson has also served as chairman of the Royal Military Police Association (RMPA), which is the natural ‘home’ for serving and retired Royal Military Police (RMP) personnel who wish to retain their links to fellow servicemen and to the Corps. Based in Aldershot, the Hampshire branch is part of the national RMPA network overseen by the RMP’s Regimental Headquarters located within the Defence Police School at Southwick Park in Portsmouth.

From November 2007 through until February 2012, Evanson was group head of security operations at DeLaRue plc, the world’s largest integrated commercial banknote printer and passport manufacturer employing over 4,000 staff and producing over 150 currencies worldwide. The company is a trusted partner of Governments, central banks and issuing authorities around the world and is listed on the London Stock Exchange.

Prior to joining the world of private security, Evanson was a lieutenant colonel in the British Army, serving with the Royal Military Police. Evanson’s distinguished 34-year Army career stretched from January 1974 until December 2007 and saw the fulfilment of several roles, among them Commanding Officer for the Joint Service Police Unit and Provost Marshal in Sierra Leone.

Message to The Security Institute’s membership

In an inaugural message to The Security Institute’s membership posted on the organisation’s website, Evanson has noted some of the priorities for his tenure as chairman. Here is that statement in full:

“First of all, I want to put on record my personal appreciation, the appreciation of the Board and – I’m sure – that of our wider membership to Emma Shaw for her visionary work as chairman of The Security Institute over the past two years. Emma has worked tirelessly to further the interests of The Security Institute throughout her tenure, and has left us with a platform which we can now use to grow this organisation both in terms of its membership and influence. As Emma begins a fresh chapter of her life, we wish her the very best for the future.

“What can you expect from me as your new chairman? Certainly nothing less than hard work, but there are a few pointers I’d like to share with you to give you some idea of the priorities I will be promoting as part of my chairmanship of the Institute.

“First, it’s important that we don’t lose sight of the fact that we’re a membership organisation run on sound business principles rather than a business that happens to be a membership body. There’s a considerable difference between the two. We exist first and foremost for the benefit of our members and of the wider profession. It’s important that we generate the financial surpluses to enable us to do that, of course, but generating those surpluses must never become our primary aim.

“Second, I restate your Board’s intention to do all within our power to deliver Chartered body status to The Security Institute within a realistic timeframe. One of the key precursors of this is that we must offer an inclusive approach as a membership organisation. Since our founding, we have focused exclusively on the senior ranks within the security profession while overlooking the fact that it’s very often those at junior and middle stages of their careers who can benefit most from the community that’s offered by a professional body. We will be active in encouraging individuals at these stages to join the Institute in order that we can work with them to develop their careers within our industry.

“Third, the key to success in any profession is having a solid educational foundation on which to build. We will actively seek links with educational institutions to promote security education qualifications and will also be ensuring that our own educational offerings are robust and develop in line with the evolving needs of security practitioners. From this foundation will come solid career pathways from entry level through to leadership positions, and we intend to be there to help members of the security profession at each upward step.

“We’ve taken giant strides in our first 15 years. That said, the biggest challenges are still ahead of us. I aim to grow our membership, embed our influence within the security profession and wider society and lead us further down the path towards eventual Chartered body status.

“I’m sure I can rely on the support of each and every Security Institute member during this journey.”