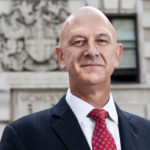 Adrian Leppard QPM, former Commissioner of the City of London Police, has been awarded a CBE in Her Majesty The Queen’s 2016 Birthday Honours List. Leppard served as the Commissioner from 2011 until he retired in December last year.

“I feel incredibly honoured to receive such recognition,” commented Leppard. “Policing is an immensely rewarding profession and it has been my pleasure to lead some amazing people who have given their all for their communities. In particular, the officers and staff of the City of London Police have been tireless in their efforts to protect us all from cyber crime. This award is in recognition of those great people with whom I’ve had the honour to work throughout my policing career.”

John Barradell, Town Clerk of the City of London Corporation, observed: “This is a well-deserved recognition of Adrian’s significant contribution to the success of policing in the Square Mile and the wider UK economy. During his period as Commissioner, Adrian brought a steely focus to preventing and tackling cyber and other types of economic crime. This ensured the City of London Police’s continued role as an essential part of UK law enforcement.”

Adrian Leppard joined Surrey Police in 1984 and developed a career as a detective specialising in serious and organised crime investigations. He worked on investigating contract killings and the world’s largest cash robbery of £53 million. Leppard served as a chief officer in Kent Police for five years before taking up his final role as Commissioner of the City of London Police in January 2011.