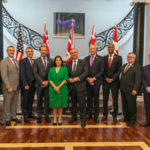 Tech companies should prioritise the protection of their users and the wider public when designing services, the UK and international security partners have warned. Senior ministers from the UK, Australia, Canada, New Zealand and the United States have reaffirmed their commitment to work together with industry to tackle a wide range of security threats.

The commitment follows a two-day Security Summit, known as the Five Country Ministerial, where Home Affairs, Interior Security and Immigration Ministers of the ‘Five Eyes’ countries discussed current and emerging threats which could undermine national and global security. This important partnership and these issues will remain a focus for the UK now and post-Brexit.

During a round table discussion involving tech firms, ministers stressed that law enforcement agencies’ efforts to investigate and prosecute the most serious crimes would be hampered if the industry carries out plans to implement end-to-end encryption without the necessary safeguards. They added that encrypted services could mask the full scale of harms on the Internet and put vulnerable users at risk.

Home Secretary Priti Patel said: “The ‘Five Eyes’ are united that tech firms should not develop their systems and services, including end-to-end encryption, in ways that empower criminals or put vulnerable people at risk. As Governments, protecting our citizens is our top priority, which is why, through the unique and binding partnership of ‘Five Eyes’, we will tackle the emerging threats together.”

Also speaking at the conclusion of the two-day Security Summit, United States Attorney General William Barr said: “The ‘Five Eyes’ partnership is vital. Throughout this week, we have had substantive, frank and positive discussions surrounding our shared duty to protect public safety. Encryption presents a unique challenge. We must ensure that we do not stand by as advances in technology create spaces where criminal activity of the most heinous kind can go undetected and unpunished. Indeed, making our virtual world more secure should not come at the expense of making us more vulnerable in the real world. We’re grateful for the leadership of Home Secretary Priti Patel in facilitating these critical discussions and shared commitment to safety for all.”

Industry agreed to collaborate with the ‘Five Eyes’ Governments on a set of voluntary principles, to be drawn up by the end of the September, on steps they will take to combat child sexual exploitation and abuse, including the growing threat of live-streaming.

The theme of this year’s meeting was ‘emerging threats’, with ministers also turning their attention to common risks posed by new technologies, including connected devices, the terrorist use of the Internet and foreign terrorist fighters.

The following commitments were agreed by those Ministers present:

*to create a stronger approach to the misuse of drones, with the UK hosting an event next year to enhance co-operation

*to maintain efforts to combat foreign interference in elections, the economy and academia

The Quintet of Attorneys General from the ‘Five Eyes’ countries also joined the Five Country Ministerial for meetings on online harms, encryption and foreign terrorist fighters.

Attorneys General from the UK, the USA, Canada, Australia and New Zealand are also discussing a range of shared issues including cyber crime, hostile state activity and social media and data privacy issues.

The Five Country Ministerial partnership continues and will be hosted in 2020 by New Zealand.