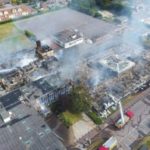 Fire has decimated The Selsey Academy, the main building of which dates back to the 1960s

The Fire Sector Federation is calling on the Department for Education (DoE) to re-introduce the concept of property protection into its proposed revisions to Building Bulletin (BB) 100: Design for Fire Safety in Schools*. The move follows the devastating fire that occurred at The Selsey Academy in West Sussex on 21 August.

More than 75 firefighters tackled the height of the blaze. The Hampshire Fire and Rescue Service sent crews to help their West Sussex colleagues, while members of the South East Coast Ambulance Service was also present at the scene.

With large sections of the school destroyed, the Federation says the incident clearly demonstrates the devastating impact that fires in schools have on pupils and the disruption they cause to education (and, indeed, the local communities they serve).

The Federation highlights that the current 2007 version of BB 100 acknowledges the societal impact of fire and signposts users to a tool kit developed by the Building Research Establishment, which assesses the risk of a fire to determine the level of fire protection required. However, the Federation is concerned that the Government’s proposals to revise the guidance no longer take these considerations into account.

Fire Sector Federation chairman Brian Robinson declared: “As we would expect, the revised draft focuses quite correctly on the safety of occupants and their safe and efficient evacuation. However, it appears to have relegated the principles of property protection to an afterthought. This fundamentally alters what the document seeks to achieve. Effective property protection can only be achieved through a blend of risk-appropriate active and passive measures. We believe that this principle isn’t fully emphasised in the new draft.”

Robinson added: “Guidance incorporating Best Practice for property protection is extremely important because school buildings are funded by the taxpayer and, in most cases, some arm of Government is the owner. BB 100 should therefore give guidance on what’s necessary to protect a public asset from fire.”

Many of the Fire Sector Federation’s members are also concerned that the revised text removes an expectation that most new school buildings should be fitted with a sprinkler system.

“Many of our members see no reason to change the current policy of a risk-based approach for the requirement to install sprinklers in schools, and urge the Department to reconsider,” continued Robinson.

While DoE justification for the proposed changes to the guidance appears to be that the number of fires in educational establishments has fallen in recent years, the Federation responds that this is only part of the story, since the fires that do occur are becoming larger while their average cost has increased significantly.

Citing large loss statistics collated by the Fire Protection Association (FPA) on behalf of UK insurers, the Federation notes that, between 2009 and 2014, the 119 fires recorded by the FPA cost in excess of £150 million with an average cost of £1.3 million per incident. The statistics also show that the average cost year on year is also increasing. In 2009 it was approximately £330,000, but in 2014 had risen significantly to £2.8 million.

Statistics from the National Fire Sprinkler Network also suggest that, between 2012 and 2015, the presence of an automatic fire sprinkler system has benefited at least 16 schools which experienced much reduced damage as a result of a sprinkler activation and little or no disruption to the education of their pupils.

“There’s little doubt that both active and passive fire protection and fire risk management is effective,” concluded Robinson, “so there would appear to be little logic in reducing requirements for any measures needed to maintain an appropriate level of property protection.”

*The Department for Education recently released for consultation its proposed revision of Building Bulletin (BB) 100: Design for Fire Safety in Schools