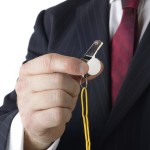 The Financial Conduct Authority has published new rules on whistleblowing

Alongside the Prudential Regulation Authority (PRA), the Financial Conduct Authority (FCA) has published new rules in relation to whistleblowing. These changes follow recommendations in 2013 by the Parliamentary Commission on Banking Standards that banks put in place mechanisms designed to allow their employees to raise concerns internally (ie to ‘blow the whistle’) and that they appoint a senior person to take responsibility for the effectiveness of these arrangements.

Issuance of the new rules follow on from the publication of the FCA’s and PRA’s final rules on improving individual accountability in the UK banking sector on 7 July 2015.

Tracey McDermott, acting FCA chief executive, commented: “Whistleblowers play an important role in exposing poor practice in firms and, in the past few years, have contributed intelligence that has been crucial to action taken against firms and individuals. It’s in the interests of the industry and regulators alike that wrongdoing is identified and addressed promptly. For individuals to have the confidence to come forward, it’s absolutely vital that firms have in place adequate policies on dealing with whistleblowers and that a senior manager takes responsibility for overseeing these policies.”

McDermott added: “These rules are designed to build on and formalise examples of good practice already found in parts of the financial services industry. They aim to encourage a culture in which individuals working in the industry feel comfortable raising concerns and challenge poor practice and behaviour.”

Individuals working for financial institutions may be reluctant to speak out about wrongdoing for fear of suffering personally as a consequence. Mechanisms within firms to encourage people to voice concerns – by, for example, offering confidentiality to those speaking up – can provide comfort to whistleblowers. It is, however, important that individuals also have the confidence to approach their employers.

The new rules aim to encourage a culture wherein individuals feel able to raise concerns and challenge poor practice and behaviour. The rules on whistleblowing apply to deposit-takers (ie banks, building societies and credit unions) with over £250 million in assets and to insurers subject to the Solvency II Directive. They are non-binding guidance for all other firms supervised by the FCA.

The key rules on whistleblowing require a given firm to:

*appoint a Senior Manager as their whistleblowers’ champion

*tell UK-based employees about the FCA and PRA whistleblowing services

In recent years, the FCA has taken a number of steps to encourage whistleblowers to come forward to the organisation, including conducting a detailed review of its whistleblowing procedures and increasing the resources dedicated to the area.