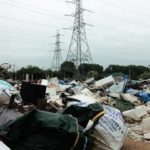 The fight to tackle the scourge of waste crime has taken another step forward, with Michael Gove (Secretary of State for the Environment) announcing a comprehensive review designed to “beef up” the Government’s approach to this matter.

The review announced by Gove, and to be chaired by Defra non-executive director Lizzie Noel, is the next step in the Government’s ongoing work to tackle such crime, which is already a serious offence with tough penalties.

A Call for Evidence will enable a wide group of people to have their say on ways to crack down further on organised crime groups who profit from waste crime.

“Organised criminals running illegal waste dumps and fly-tipping are blighting local communities,” stressed Gove. “They cost our economy vast amounts of money, pollute our environment and harm our wildlife. We must crack down on these criminals who have no regard for the impact they have on peoples’ lives. The time is right for us to look at how we can best tackle these anti-social and inexcusable crimes.”

The review will consider the types of crimes being committed and the organised crime groups involved, look at the environmental, community and economic impacts of serious and organised waste crime, consider how the Environment Agency, other organisations and the law enforcement system can work together to tackle the threat and also make recommendations for a strategic approach towards serious and organised waste crime.

Ben Wallace, Minister of State for Security and Economic Crime at the Home Office, added: “Organised crime groups exploit any opportunity to make money. Our local communities are being scarred by the illegal dumping of waste, while at the same time people are being conned into placing contracts with dodgy waste firms. We are firmly committed to ending this scourge and I look forward to exploring what more Defra, local authorities, the private sector and the police can do on this issue.”

More than 850 new illegal waste sites were discovered by the Environment Agency in 2016-2017. While an average of two illegal waste sites are shut down every day, they continue to create severe problems for local communities and businesses, particularly so in rural areas, as well as posing a risk to key national infrastructure.

A study conducted by the Home Office suggests that criminals may also use waste management activities such as operating illegal waste sites as a cover for crimes including theft, human trafficking, fraud, drugs supply, firearms supply and money laundering.

Review chair Lizzie Noel has more than 20 years’ experience of senior roles in both the private and public sectors. She will engage with a wide range of stakeholders, with the Call for Evidence enabling a wider group of people to have their say.

“The health of our communities, environment and economy is being harmed by organised groups committing serious waste crimes,” urged Noel. “This review is an opportunity to properly understand the extent of this criminal activity. I look forward to working with a range of partners to ensure that our response is robust and effective.”

Since 2014, the Government has given the Environment Agency an extra £60 million towards enforcement work to tackle waste crime. This extra investment has shown a return of about £5 for every £1 extra spent.

Powers for the Environment Agency

Today’s announcement builds on a range of new measures from the Government to tackle waste crime, including new powers for the Environment Agency to lock the gates to problem waste sites to prevent waste illegally building up and powers to force operators to clear all the waste at problem sites. Also, the Government has extended landfill tax to include material disposed of at illegal waste sites with effect from April this year.

Sir James Bevan, CEO of the Environment Agency, said: “Last year, we closed down two illegal wastes sites every day and were granted new powers to complement our existing enforcement efforts. Our officers are also out in communities, preventing and disrupting criminals through our intelligence-led investigations and dealing with the consequences of illegally-dumped waste to the environment and the wider community. We welcome the opportunity to review how best we deploy our resources and strengthen ties across Government and with the police to target organised criminal rings behind illegal waste operations and bring the perpetrators to justice.”

The review process is due to be completed by September.