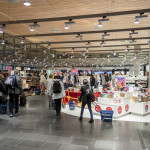 Over the past decade, thousands of column inches have been dedicated to writing the High Street’s epitaph, asserts James Somerville-Smith. The rise of online players like Amazon, eBay and Asos mean that, according to the Centre for Retail Research, online shopping sales in Europe are set to exceed £110 billion by the end of 2014*. For retailers across the region, some with massive store footprints in countries such as the UK, France, Germany, Spain and Italy, these statistics make for grim reading.

However, in the past 18 months we’ve seen signs that the survival instincts of bricks and mortar retailers are starting to kick in. Argos, a company that has just posted excellent full-year results, launched the first of six ‘digital stores’ in Old Street, east London at the end of 2013. These outlets boast voice-activated computer systems, iPads, free Wi-Fi and digital screens designed to entice customers in for a real experience.

Indeed, a recent report by consultancy Deloitte predicts that, by 2020, online stores will just be showrooms. It’s a path already trodden by Apple, of course, a company considered by many as ‘The Gold Standard’ of the in-store consumer experience.

While this shift is certainly welcome in the context of a besieged High Street, there’s one additional challenge that retailers are quickly waking up to: their changing security requirements.

Although the majority of High Street retailers have traditionally invested heavily in security infrastructure in order to protect their employees and assets against harm and theft, the changing use of space in-store means that surveillance and alarm systems must also evolve in tandem.

Let’s consider a few examples to illustrate that point.

One trend espoused by Apple, and mimicked by a host of other companies including Argos, is taking products like tablet computers, smart phones, laptops, TVs and portable music players off the shelves, out of boxes and putting them right into the middle of the store where consumers can play with them.

The marketing rationale here is impeccable. One thing that an online shopper cannot do is derive a wonderful tactile experience from a product. Even supermarket chain Waitrose recently announced that its outlets – starting with a concept store in Swindon – will provide iPads throughout for customers to research wines or recipes.

However, there’s a thin line to tread between making a product more accessible for a consumer and rendering it more attractive to a thief. It will be difficult for retailers – particularly those with hundreds of stores – to balance these conflicting priorities.

Similarly, while brighter, wider and more dynamic stores are far more welcoming and enticing for a prospective customer, they also present challenges for the security team. 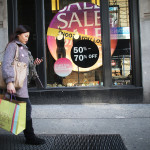 In many organisations, the location of security cameras and alarm setting procedures haven’t changed for years, even decades. However, as customers begin to use the retail space in different ways, suddenly the classic, time-honoured security procedures need to be updated.

Another hot trend is for vendors that move around the space, empowering customers to make a purchase on the spot rather than take the positive decision to walk up to the till. Again, this is a double-edged sword. Yes, it boosts ease-of-purchase, but it does increase the risk of employee theft.

Without the ability to monitor staff conduct behind the cash register and record their behaviour, there’s an opportunity for the small percentage of would-be thieves in the European retail workforce to siphon off cash provided by customers.

The role of technology

As store layout and product displays change, one area that retailers are starting to focus on is video analytics. This is technology that can monitor the movements of customers and staff in a store environment and alert the security team to behaviour that’s anomalous to the standard shopper or staff member.

An example might be a person who is spending a significant amount of time ‘lurking’ around a hidden shelf or display. This could indicate a potential theft risk to be explored.

A video analytics solution is capable, for example, of identifying when a large group of people is gathered around a specific product, alerting the store to the risk of theft. In addition, linking video with till transactions makes it easier to quickly analyse and act on customer and employee fraud (for instance by identifying when a member of staff ‘scans’ a product that doesn’t subsequently appear on the till record).

There’s also a compelling argument for stores to invest in higher-specification cameras in order to pinpoint the perpetrators of theft. Nothing deters would-be thieves better than a track record of identifying, finding and prosecuting individuals who have stolen from the premises. 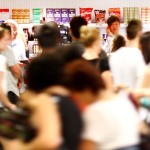 In order to aid police officers in their investigations and, crucially, provide evidence that stands up in court, higher image quality is massively important.

Further, in spaces that are busy with people moving around more dynamically than might be the case in a traditional store, more pixels increase the probability of accurately spotting and easily identifying a thief.

A number of brands are experimenting with out-of-store experiences designed to boost footfall and drive sales. One phenomenon widely used by retail brands is the pop-up store. Designed to raise brand awareness of a particular product line, these stores are inviting and often used to entice customers with ‘freebies’ or special offers.

Schemes such as Pop-Up Britain are providing retailers with an opportunity to show-off their wares in high-end locations such as St James’s Gateway in London’s Piccadilly.

New Look recently created its own branded double-decker bus which is touring the UK in order to make it easier for consumers to purchase jeans. With spacious changing facilities, a nail bar and a ‘Selfie Studio’, the moving shop is a truly innovative way of capturing customers.

Again, though, these stores are tough for security teams to protect. The temporary – or even mobile – nature of the structures means that it’s impossible or prohibitively expensive to fit wired security systems to ensure stock and cash remains protected from theft.

In this context, one solution that retailers are increasingly looking to is wireless technology. Alarm systems exist today that allow a panel to be wired into a space and wireless sensors fitted right the way through it. These can be quickly and easy moved to accommodate the changing needs of staff and customers. It’s a low-cost, effective way of protecting temporary structures more convincingly.

In addition, the development of cloud video systems is making it increasingly easy to quickly set up camera systems for temporary spaces wherein cloud storage not only means cheaper and easier set-up costs for this type of application, but also that images are stored remotely and cannot be stolen from local storage at the same time that a theft takes place.

Security challenges must always be observed

In summary, then, the changing layout of stores is an important part of the High Street’s efforts to restore profitability and turn a retail space into an asset rather than a cost. This thoughtful and intelligent use of stores to entice, surprise and delight customers is to be encouraged. 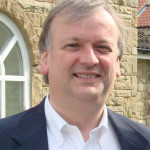 However, there are security challenges that must never be ignored in the process. If retailers revolutionise how their space is used, it follows that thieves will identify new and innovative ways of stealing and that the 0.01% of staff intent on ripping off their employee will do the same.

Security teams must invest in video analytics, superior surveillance technology and wireless alarm systems in order to safeguard both employees and assets present in the ever-changing world of retail.