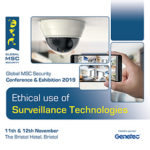 On Monday 11 and Tuesday 12 November, security practitioners, law enforcement professionals, academics and policymakers joined forces in Bristol to debate the ethical use of surveillance at the 21st edition of the annual Global MSC Security Conference and Exhibition. Official Media Partner Risk Xtra reports on proceedings.

Following a welcoming address and general conference overview by Global MSC Security’s managing director Derek Maltby and event chair David White, the thought-provoking programme began with a presentation by Assistant Chief Constable Jenny Gilmer of South Wales Police under the heading: ‘If the lights go out… The role of CCTV in policing’.

Gilmer explored the current and potential use of CCTV and video surveillance systems along with the benefits and challenges of collecting and using data captured by the public on smart phones. She also discussed the need to think across force boundaries (to exploit efficiencies) while respecting privacy and ethics, acknowledging that surveillance has its controversies and that it’s important to enhance public confidence in CCTV. The presentation concluded that there needs to be a more holistic use of CCTV and better use of existing resources. 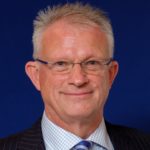 Christian Morin, vice-president of integration and cloud services at the event’s headline sponsor, Genetec, delivered a presentation entitled ‘The demise of Sneakernet: Efficiently and responsibly managing video evidence in the information age’ which examined the legacy issue of having to retrieve physical format video evidence (the so-called ‘Sneakernet’). Morin examined in detail the legal and ethical issues of collecting data in this way and presented a Genetec Case Study illustrating how data can be effectively aggregated using modern web and mobile device technology to manage digital evidence.

Kevin Thomas, area manager for mobilisation and resilience at the Cornwall Fire and Rescue and Community Safety Service, gave an overview of how the county reinvigorated its Critical Control Centre. His presentation entitled ‘Collaborative innovation within a critical environment’ discussed how Cornwall incorporated a number of services into the Critical Control Centre (including fire and public space CCTV), which has seen a reduction in call handling needs and enabled revenue generation to cover a sizeable proportion of operational costs.

Thomas also discussed the county’s innovative partnership with North Yorkshire and how it provides a critical 999 service while also contributing towards safer communities. 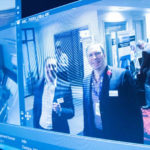 Following the coffee break, Martin Bonfield (UK sales manager at event sponsor Synectics) presented on ‘Building ethical capacity into surveillance technology’, duly encouraging a thought-provoking discussion on the best ways to use new technology while staying ethically transparent. Bonfield looked at public concern over the use of facial recognition, how ethics can change over time and how different countries and cultures vary on what’s acceptable.

To illustrate the power of surveillance technology, Peter Spindler MSyl of Peter Spindler Associates treated the audience to an entertaining and insightful presentation entitled ‘Technology and the Hatton Garden Heist’ which focused on the infamous London robbery in 2015. Spindler went through the timeline, from the gang’s preparation to the latest convictions – a result he described as “digital detectives convicting analogue criminals.” The presentation showed how the police had tracked the suspects using surveillance to build a case for prosecution and discussed the lessons learned from the operation.

Karl Haw, head of business development at event sponsor Bosch Security and Safety Systems, presented on ‘Pan, Tilt or Zoom… Analytics that are always working’. Haw gave an insight into video analytics and ‘turning the camera into the sensor’. He showed how setting virtual areas can be used to more effectively monitor key locations, not only for potential crimes, but also to help cut traffic congestion and pollution.

The morning session was concluded with a fascinating look at ‘How drones can be used at major public events’ by drone specialist and pilot Solomon N’Jie. Having worked on the 2012 London Olympic Games and many high-profile festival sites, N’Jie discussed the problems of drug smuggling, illegal entry and gang violence and how drones can monitor these situations effectively and unnoticed. He also discussed the threats from illegal drones, how licensing may affect the situation and how drones have sometimes been unfairly demonised in the media. 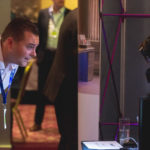 Following a lunch break and the chance for visitors to visit the exhibition stands, Tony Holloway (business development manager at event sponsor 360 Vision Technology)  presented on ‘Effective video surveillance technology’. The presentation looked at the challenging environments for modern CCTV cameras and showed how thermal imaging and powerful zoom technology can be used to monitor the most demanding of locations.

Allyson Macvean BSc (Hons) MA PhD PFHEA, Professor of Policing and Criminology at Bath Spa University, gave the audience a different perspective in her presentation entitled ‘Ethics and facial recognition technology: a potent cocktail for success or disaster?’ Professor Macvean told the audience that ethics are vital and under great scrutiny, underlining that media headlines are not often positive on the subject. She discussed growing public awareness of facial recognition, the fact that many profiling databases lack diversity (and can therefore be biased) and how both the private and public sector will need to work together to build public trust in the technology and its use. 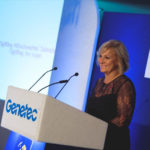 The final presentation of the day was from Dafydd Llywelyn, Police and Crime Commissioner for Dyfed Powys Police. Under the banner ‘CCTV in a rural setting’, Llywelyn gave an overview of the Dyfed-Powys CCTV Project (where local authority-owned town centre CCTV was being switched off), its vision, the partnerships involved, procurement and contracts, the reality of the project and public opinion to date. This initiative has rolled out a co-ordinated CCTV service across 24 towns.

Llywelyn also gave a demonstration of the capabilities of the cameras involved (including their ability to identify and facilitate convictions) and examples of their use at various public sites/events, as well as an overview of further planned projects.

A Q&A session followed which was mediated by David White and featured a panel of Professor Allyson Macvean, Dafydd Llywelyn, Peter Spindler and Christian Morin. Questions included the potential issues of police officers using body-worn cameras when entering a Control Room and the likely future of policing and surveillance.

As in previous years, the Global MSC Security Conference and Exhibition 2019 aimed to examine the subjects with relevance to real world operations, offer expert opinions from the speakers and engage with the enthusiastic audience, as well as showcasing some of the latest and most advanced technology on offer in the exhibition.

Victims’ Law is Needed to End ‘Lottery of Support’