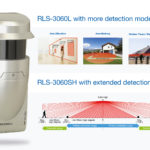 OPTEX, the specialist manufacturer of detection solutions, has developed new versions of its product firmware and configuration software for the REDSCAN RLS-3060 Series of laser sensors that brings greater functionality to the existing models.

Version 8.0 of the RLS-3060 Series firmware and REDSCAN Manager feature a number of upgrades for the long-range, 190 degrees 2D LiDAR Series. Both models, the RLS-3060L and RLS 3060SH, will offer more flexibility in managing dry contacts with the option to switch from normally open (N.O) to normally closed (N.C).

The new version brings features to the standard model 30 metre-radius RLS-3060L that were previously available only in the high-end model. Four detection areas can now be independently adjusted on an analogue connection, while up to eight areas may be adjusted on an IP connection. The shape of the detection area can also be customised to the layout of the site. An ‘Area Allocation’ or ‘Masking’ function will enable end users to precisely define a number of independent detection zones.

Another feature now available for the standard laser scanner model with these upgrades is the indoor/outdoor ‘Loitering Detection Mode’. This function detects any suspicious behaviour by monitoring if a person or object is staying longer than the preset duration of time in the selected detection area.

For the advanced RLS-3060-SH model, which is designed to operate in harsher environment, the upgrades enable a ‘Detection Range Expansion’ mode extending the detection area to a 50 metre radius. Used in horizontal mode, this setting allows the creation of a pre-warning zone from 30 metres to 50 metres radius in which larger objects such as vehicles can be detected. When the LiDAR is set up in a vertical detection mode and mounted at 3.6 metres, the laser scanner can detect a standing or squatting person over 100 metres. A compelling reason for security and risk professionals to use this sensor for perimeter protection.

Ryosuke Miwa, senior general manager of the Global Security Division at OPTEX Japan, believes the new firmware and configuration software version increases the feature set for the company’s long-range laser scanner and brings more value to end user customers. “With its new features and integration with a number of VMS and Physical Security Information Management platforms, our REDSCAN RLS-3060 Series is ideal for protecting perimeters, roof tops, ceilings at commercial sites and critical infrastructure in general. We’re delighted that the new version has now been rolled out.”

People and Processes: The Key Drivers for Effective Cyber Security