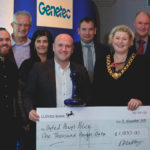 Global MSC Security has presented Dyfed Powys Police with its Gordon McLanaghan Security Innovation Award for 2019 in recognition of an initiative led by the Police and Crime Commissioner (PCC), Dafydd Llywelyn, to deliver a centralised CCTV surveillance operation across four counties and 24 towns. The prestigious award is presented annually in memory of Bristol City Council’s former CCTV and Emergency Control Room manager Gordon McLanaghan, recognising those who have gone above and beyond the call of duty to achieve a successful technical security solution.

The previous CCTV infrastructure across this region in Wales was predominantly owned by the local authorities and town councils. However, in May 2016, the PCC pledged to re-invest in a modern surveillance camera infrastructure to include a central monitoring function that would improve safety throughout the towns and communities within the four counties of Dyfed and Powys.

The final stage of the project was completed in September this year and, to date, 149 cameras have been installed across 24 towns. The majority of the cameras are wirelessly linked and transmitted to local police stations where images are then transferred across the force network to the CCTV Monitoring Suite at police headquarters.

The project has been completed in collaboration with local authorities, the Welsh Government, the Harbour Master’s Authority and National Parks. Commenting on its success, Dafydd Llywelyn stated: “There have been numerous criminal investigations where CCTV evidence has proven critical in the identification, arrest and charging of suspects in serious cases of violence against individuals, burglaries and domestic-related violence. The CCTV system has assisted in the early identification of incidents.”

Global MSC Security’s managing director Derek Maltby commented: “There are many standout innovations that other police forces can learn from this project. One of note is the Wide Area Network upgrade, which addresses a major pain point for officers. No longer do they need to travel to a local camera site to burn images to disc as those images are streamed to the CCTV Monitoring Suite in the Force Communication Centre. Furthermore, the data can be edited and shared as evidence with criminal justice partners electronically, in turn saving huge amounts of time and resource. This innovative project represents a win-win for the public and the police service.”

The award was presented on Monday 11 November during a dinner held at the Bristol Hotel in central Bristol to raise money for Global MSC Security’s chosen charity, namely The Lily Foundation. Dafydd Llywelyn was presented with the trophy (made from Bristol Blue Glass) and a £1,000 cheque, which he then generously donated to the charity.

Derek Maltby concluded: “I’m proud and impressed by the generosity that those working in the security and public safety sectors demonstrate each year. In one evening we have raised over £5,400 for The Lily Foundation.”