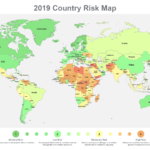 Security risks include petty and violent crime, civil conflicts, protests, strikes and terrorism. Political risks encompass Government stability, levels of corruption, political interference and sanctions, while medical risks include the presence of diseases, the standard of medical facilities, access to water and the availability of pharmaceuticals.

Environmental risks include proximity to seismic activity, the frequency of storms and the presence of man-made
ordnance such as landmines and climatic hazards. Infrastructure risks encompass road safety and standards, the provision of utilities such as electricity, cyber crime and aviation security and standards.

Unsurprisingly, the Middle East and North Africa emerge as the most high risk locations for travellers, with much of Africa and Central America also posing threats. Countries from these regions also dominate the individual category rankings, with Syria and the Republic of South Sudan appearing in the top infrastructure, medical and political risk lists as well as the overall Top 10 risky destinations.

On the flip side, for countries with more a population of more than a million, Singapore , Taiwan and Uruguay emerge as the lowest risk nations, making them the potentially safest destinations for travellers. Overall, Aruba is ranked as the lowest risk country in the world.

According to a recent poll conducted by Ipsos Mori, 63% of security professionals believe risks faced by travellers have increased in the last 12 months.