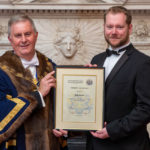 Detective Sergeant (DS) Joby Reeve of the City of London Police has been selected for the ‘Principal Bravery Award’ by the Sheriffs of the City of London sitting at The Old Bailey. The prestigious accolade was presented to DS Reeve on Monday 7 October during the Annual Dinner of The Worshipful Company of Security Professionals, held at The Mansion House in London by Alderman and Sheriff Professor Michael Mainelli and Sheriff Christopher Hayward.

The Sheriffs’ Award was introduced shortly after the “7/7” London tube and bus bombings that occurred in 2005 to recognise outstanding acts of bravery by individuals from across the UK. Every year since then, the Sheriffs have sought nominations for members of the public who have, without thought for their own safety, acted to confront danger in a selfless and inspirational way.

Following a rigorous review of all nominations by The Worshipful Company’s nominated representatives and the Sheriffs of the City of London, it was agreed that the award should be presented to DS Reeve.

On Saturday 11 August 2018 while off duty, DS Joby Reeve witnessed a man being robbed by a gang. When he reached the roadside, and with no hesitation, DS Reeve launched himself at the suspects who were riding a moped. He seized and dragged the pillion passenger off the bike. As DS Reeve grabbed the suspect in a bear hug to detain him, he, the rider and the bike all fell to the ground. What was taking place was a four-handed moped robbery.

As DS Reeve and the suspect stood up, one of the robbers drew a knife (a blade around eight inches long) with the clear intention of stabbing DS Reeve in the chest and possibly killing him. In a split-second judgement, DS Reeve kicked the suspect in the torso, which created enough distance at the crucial moment to send the knife into the top of his thigh instead. DS Reeve showed huge bravery at the risk of his own life and stood his ground. He was all that stood between the suspects and their original victim and he forced their retreat. 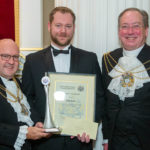 In the minutes that followed, while waiting for the police and the Ambulance Service to arrive on scene, DS Reeve applied a bandage to his own wound. He refused to yield his position and gave clear updates about his injury and what had occurred, despite losing a considerable amount of blood.

DS Reeve didn’t hesitate to put his life on the line for a complete stranger. He was without any PPE or a radio. It was an entirely selfless act and a clear demonstration of his incredibly strong character and values. DS Reeve demonstrated extraordinary courage and dedication, putting the lives of others before his own without a second’s thought. His actions serve as an inspiration in the highest traditions of the City of London Police.

The Sheriffs’ Award is launched annually in February with the winner selected by the Sheriffs in the Autumn of the same year. As in previous years, The Worshipful Company received a substantial number of high-quality nominations. As part of this award, DS Reeve will receive a cheque for £2,500. His name will be inscribed on a Board of Honour and placed in a Book of Honour, which are both on permanent display within the Central Criminal Court, The Old Bailey.

The Sheriffs’ Award is open to nominations from the general public, the business community, the Emergency Services and the Armed Forces.

Recognition from the Police Federation

Back in July, DC Joby Reeve’s actions also saw him named as the Region 8 (London) winner at the 24th national Police Bravery Awards, hosted by the Police Federation of England and Wales. The awards, sponsored by Police Mutual, honour and recognise police officers who perform outstanding acts of bravery.

Speaking about the incident, DC Reeve said: “My partner was with me and from her point of view – there was a car obscuring most of her view – she just saw the knife coming down towards my chest. When you see that, it’s hard to erase such a thing from your memory. As far as she was concerned I’d been stabbed, and a lot of people don’t survive that sort of injury. Luckily, the knife went into my thigh and that was the saving grace really. It’s a difficult thing to get over. It makes you hyper-aware of certain incidents. At the end of the day you suffer mentally with it.”

John Apter, chair of the Police Federation of England and Wales, added: “These awards highlight the incredible bravery that police officers show every single day. DC Reeve demonstrated outstanding courage and dedication, putting the lives of others before his own without a second thought.”

John Perks, CEO of Police Mutual, concluded: “For the past 11 years, Police Mutual is proud to have sponsored such an inspiring event in the policing calendar. It’s a privilege for my colleagues and I to be able to show our respect for the exceptional bravery shown by police officers who risk their lives every day to protect the public and keep us safe.  We hope that we can continue to play our part in helping to improve the lives of the police family.”

Fraud in the NHS: You Need to Find It to Fight It