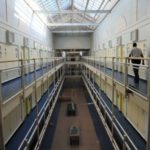 Dangerous extremists will be separated from the mainstream prison population and placed into specialist centres under new rules published by Prisons Minister Sam Gyimah at the Ministry of Justice. Three separation centres are being created to form part of the wider Government strategy designed to tackle extremism in prisons, holding up to 28 of the most subversive offenders and preventing their influence over others.

An amendment to prison rules laid before Parliament on Friday 21 April means that prisoners can be placed in a separation centre if they’re involved in planning terrorism or are otherwise considered to pose a risk to national security.

Those who are spreading views that might encourage or otherwise influence others to commit terrorism crimes – or anyone whose views are being used in a way which undermines good order and security in prisons – may also be placed in one of the centres.

The first centre will be up-and-running at HMP Frankland in the coming weeks, with two further units to follow at other establishments.

“Any form of extremism must be defeated wherever it’s found,” outlined Gyimah. “It’s right that we separate those who pose the greatest risk in order to limit their influence over other prisoners. These centres are a crucial part of our wider strategy aimed at helping to tackle extremism in prisons and ensure the safety and security of both our prisons and the wider public.”

A prisoner will be considered for one of the centres if their behaviour behind bars meets one of the criteria included in the new prison rule and the level of risk they present can only be managed through separation.

Once in a centre, they will be reviewed by experts every three months and only be returned to the mainstream prison population if it’s considered that the risk they present has reduced to a level that can be effectively managed there.

The introduction of the centres was one of the principal recommendations of a Government-commissioned independent review into extremism in prisons. The majority of the recommendations made are being implemented.

The Government takes the threat of radicalisation and extremism in prisons extremely seriously and has built on the recommendations in the review to further boost efforts to tackle extremism.

The centres form part of the wider strategy to tackle extremism, which includes:

*the formation of a new Directorate for Security, Order and Counter-Terrorism directly responsible for monitoring and dealing with the evolving threat of extremism

*the launch of a new unit that will analyse intelligence and advise prison managers in England and Wales on how to deal with specific threats, as well as instruct and train prison and probation staff on how best to deter offenders from being lured into extremism

*a new training package designed to identify, report on and combat extremism being rolled out to all prison officers and new pre-employment vetting checks for both Chaplains and Imams being introduced from February this year