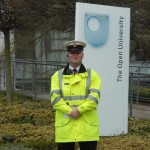 The Open University is the largest academic institution in the UK and a world leader when it comes to flexible distance learning. Since it began operations back in 1969, The Open University has taught more than 1.8 million students and currently numbers almost 200,000 students on its register, including over 15,000 from overseas territories.

Over 70% of its student cohort are in full-time or part-time employment while, at some point in time, four out of five FTSE 100 companies have sponsored members of their staff to take Open University courses.

In the latest assessment exercise for university research (the Research Excellence Framework), nearly three quarters (72%) of The Open University’s research was assessed as 4 or 3 Star (ie the highest ratings available).

The Open University is unique among UK universities in terms of having both an access mission and demonstrating research excellence.

Headquartered at Walton Hall, a 110-acre site in Milton Keynes, The Open University’s site comprises 63 individual buildings and blocks that provide offices, laboratories, lecture halls, sports and social areas for over 4,000 members of staff. There are also 12 regional and national administrative centres and two warehouse locations.

The Open University recognises the importance of having a high quality security operation in place and, for the last seven years, Corps Security has been tasked with making sure that all of these environments are safe and secure.

Corps Security’s regional operations director, Nigel Horne, told Risk UK: “The security operation at Walton Hall comprises a mix of bespoke security guarding and surveillance technology. The security guarding team consists of 16 core staff and seven relief personnel with four officers present on each shift. We ensure that all of those officers deployed understand the specific requirements necessary for carrying out their duties on this unique site. Those duties include door locking/unlocking and car park management.”

There’s an extensive road layout on site, with public rights of access on certain parts of that layout. While open access to this large and complex site is seen as an essential ingredient of academic life and a positive attribute, such a policy does have a certain level of risk attached to it.

That being the case, all security officers are afforded Operation Fairway training as well as a five-day, on-site awareness course. Sensitive questioning, recognising hostile reconnaissance, Post Room threats and even sign language instruction is delivered to enhance vigilance, while experts from Corps Security also carry out regular ‘Train The Trainer’-style modules for supervisors and team leaders.

“Security is often viewed as an intangible service,” explained Horne, “so we’ve developed a system whereby it’s possible to accurately measure our performance and clearly identify any areas that need to be addressed. At The Open University, we’ve developed a system to define a series of key performance indicators (KPIs) that provide comprehensive sets of quantitative and qualitative data. To encourage a strict regime of continuous service review and appraisal, regular meetings take place wherein we analyse achievements against agreed standards and then examine where potential improvements could be made.”

This KPI assessment analyses everything from training and incident reporting through to management visits and even the appearance and communications skills of officers.

Asked to describe the secret behind the success of the working relationship between Corps Security and The Open University, Horne explained: “It can be encapsulated in one word – partnership. Both parties demonstrate a willingness to work together in a way that encourages open channels of communication. This means that any necessary changes can be put into effect quickly in order to achieve common goals and objectives.”

This view is echoed by Mary Legge, head of operations and estates at The Open University, who concluded: “Corps Security provides an excellent service across all of our sites. The company presents an exemplar model of how a security guarding team should operate. The security officers are an invaluable part of our operation and the positive feedback I receive from staff, students and visitors underscores just how highly valued they really are.”