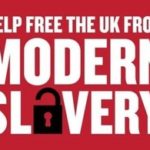 Home Secretary Priti Patel has pledged to consign modern slavery to the history books as the Government marked Anti-Slavery Day by urging the public to play their part in stamping out this barbaric practice. A series of events took place aimed at raising public awareness of how to spot the signs of modern slavery and highlight what the Conservative Government is doing to tackle this form of criminality.

The International Slavery Museum in Liverpool featured an interactive nail bar – a business stream which is often linked to modern slavery – as well as talks from law enforcement to inform the public about slavery in the UK.

The Home Office has published the 2019 Modern Slavery Report, which shows that there were more than 1,400 active investigations into modern slavery cases in the year to July 2019. This represents a rise of more than 64% on the previous year.

Patel stated: “The shadow of modern slavery can fall across any aspect of our lives – the clothes we wear, the food we eat and the services we pay for. This is an outrage we refuse to ignore. That’s why the Government is determined to end this vile crime and protect its victims. I’ll not stop until slavery is truly consigned to the history books.”

In addition to the event at the International Slavery Museum, Border Force officials raised awareness of modern slavery at railway stations, ports and airports throughout the UK and educated people on what they can do if they suspect someone’s being exploited.

Victoria Atkins, minister for safeguarding and vulnerability, commented: “However much we may think of slavery as an historic crime, the truth of the matter is that people are being trafficked, abused and exploited in the 21st Century. Raising awareness of modern slavery is crucial in the fight against this crime, which is why Anti-Slavery Day and events like the one in Liverpool are so important.”

For its part, the Cabinet Office has launched a campaign in London to help front line professionals spot the signs of modern slavery and take action. The ‘Hidden in Plain Sight’ campaign is asking workers in healthcare, job centres and banks to “take a second look” at the people they interact with for the tell-tale signs of exploitation. These include being forced to pay their wages into someone else’s account, not being in possession of their own documents and being accompanied by someone who appears controlling or otherwise unwilling to leave them alone.

The Government has announced the appointment of Jennifer Townson as the first Migration and Modern Slavery Envoy. In this new role, Townson will be an advocate for tackling modern slavery globally, in turn helping the UK to co-ordinate its efforts with other nations.

Establishing the role was one of the recommendations following the Independent Review of the Modern Slavery Act.

Lord Ahmad of Wimbledon, Foreign and Commonwealth Minister of State for Human Rights, observed: “I welcome the appointment of Jennifer as the first Migration and Modern Slavery Envoy. The UK is at the forefront of the fight against modern slavery and this appointment gives us a focal point for our international effort. Jennifer will be a strong voice for the UK in bilateral and multilateral discussions on these issues.”

The Government’s 2019 Annual Report shows significant progress in tackling this crime with almost 7,000 potential victims referred to the National Referral Mechanism (NRM) in 2018. That’s a 36% increase on the previous year. There has also been an uplift in operational activity designed to tackle modern slavery, with more than 1,400 active law enforcement investigations compared with 850 in July 2018.

The report also outlines the progress made in improving the support received by victims of modern slavery through NRM reform, including the launch of the Home Office Single Competent Authority (a new single, expert unit formed to make all decisions on whether someone is a victim of modern slavery) and continuing the roll-out of Independent Child Trafficking Guardians across England and Wales.

The Home Office has committed to strengthening the effectiveness of the transparency in supply chains provisions. This included consulting on potential changes to the legislation such as extending transparency reporting to the public sector and announcing plans to create a free Government-run central reporting service specifically for business’ modern slavery statements.

Working Together: Raising Standards in the Fire Safety Sector